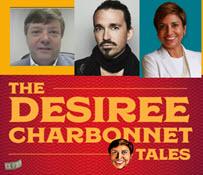 What will Sidney do? Can Desiree Charbonnet get more of the white vote than she did during the general election?  What about Michael Bagneris who did have a following in the white community while his support in the African American community was very low comparatively speaking?

Jeff Crouere, political commentator, columnist for Bayoubuzz.com and Townhall.com, radio talk show host for WGSO 990 AM, discussed these issues as part of a Facebook Live interview earlier this week, with Stephen Sabludowsky, publisher of Bayoubuzz.com.

In part two of the Facebook Live discussion, Crouere talked about these issues.  Below is the transcript of his comments and here is the link to the entire discussion on Youtube..

Sidney seem to be upset that she didn't make the debate and and then talked about her her backers and and some of her activities previously, I guess, with maybe members of the Jefferson family or whatever but none of it seemed to be really scandalous.  I mean none of it seemed to be really super damaging it was just him attacking her and people were like wow why is Sidney attacking Desiree Charbonnet--it must be something wrong and I think that hurt her and then the Not For sale NOLA group doing their ads about her pretty much selling out, and then Bagneriss hit her on Ike Spears and Blair Boutee being a part of a campaign team,

So, you know, all that together turned her from the front-runner into the second place but Bagneris went nowhere. The final Faucheux poll had him at 19 percent and he finished a nineteen percent.  So he didn't pick up any of that, it all went to Latoya Cantrell.

She was sort of above the fray and considered one of the front-runners and people "like well, I don't want to waste my vote on someone he's probably not going to make it, I'll go with the Latoya Cantrell".  Seemingly now you're gonna have Stacy Head possibly for Cantrell because she put out a statement critical of Desiree's Charbonnet.  Latoya might benefit from that, she might benefit from Sidney, this group Not For Sale NOLA, but then does Desiree Charbonnet has the citywide white elected official in her corner and that is the DA, Leon Cannizzaro, and you would think that can maybe help boost her vote in the white community.  She did not do very well there.

That's what you call a strong election when you get a balance of black and white support and you're above the fray and get attacked and you run first and surprise everybody, I mean, tha-- she's in a strong position right now.  She's gonna get more money coming her way, so Desiree Charbonnet not out of it but she's now gone from front-runner to underdog.  She's got to be better than white community.  And you would think that she's got the possibility she's got the DA with her.

And that's got to be something she utilizes much more in the runoff to to drive up her white vote.  We'll see what Bagneris does--he doesn't seem to be inclined to support--Des--I don't know, I don't know what he's gonna do.  We wish him the best, of course, his daughter is seriously injured and certainly want to pray for her, and and the judge and his daughter but I don't know eventually what he'll do.