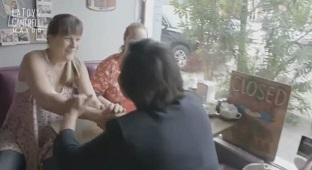 When I really think about it, the words "slim and none" come to my mind.

That's what I think when I consider the actual chance that an African American woman, hailing from California, arriving here in 1990 as a Xavier University student, would be one of two remaining candidates to be the next Mayor of New Orleans--a historically closed-community, if ever one.

So, whether intended or not,  a small local diner named Slim Goodies would be as good of a place to showcase LaToya Cantrell's sudden ascent into becoming perhaps New Orleans's most powerful political leader.

Slim Goodies, is a neighrborhood spot on Magazine Street and is featured in Cantrell's mayoral campaign commercial.

The promo shows Slim Goodies's owner, Debra Schumacher, who recalls how after Katrina, all the city really had was its own community members needing and listening to one another as they tried to build one community at a time in recovering from the remainsand hopelessness caused by the winds and waters churning cdertainty into chaos.

Schumacher claims that her diner “became known as the first place to open after Katrina” and “became the “meeting place for the whole community”. She states that the restaurant did not have power but served coffee and eggs by putting tables and chairs out on the street.  The owner told how she didn’t care if you had money or not, it was a place to go--to be sad together, to be happy together—“to celebrate, to grieve, everything happened here”.

So, how exactly does Cantrell come in?

In the ad, Schumacher then walks over to a booth occupied by Cantrell, sits down, embraces the candidate and says, “LaToya’s interest in keeping the community bonded has been really important for us, her leadership style for what she has done has been pretty amazing”

Interestingly, however, Schumacher states that “she has such a long history in city government”. Cantrell, first got involved as a community organizer in helping the Broadmoor section survive after Hurricane Katrina and has been a City Councilwoman since 2012. Her opponent, Desiree Charbonnet, while not a city councilwoman, like Cantrell, has been a municipal court judge and the Recorder of Mortgages for the Parish of Orleans.

Still the commercial's message is that New Orleans has recovered through community sacrifice and the leaders must lisen to others to understand the needs that exist and opportunities we make during the most difficult and even the better times.

Here is a link to her biography that tells her story

The Coalition to Restore Coastal Louisiana and The Urban Conservancy are hosting the 2017 New Orleans Mayoral Runoff Debate: Flood Risk and Adapting to Coastal and Environmental Change on Wednesday, Oct. 25 at 7:30 pm at Lupin Hall on the campus of NOCCA. The event, presented by the Greater New Orleans Foundation, will feature both runoff candidates,LaToya Cantrell and Desiree Charbonnet.

Recent events have pushed flooding, coastal protection and restoration and the environment to the forefront as some of the most pressing issues facing Orleans Parish. The candidates will debate how they plan to deal with flooding, the S&WB, coastal issues and more -- if elected mayor.

Doors open at 7 p.m. We ask attendees to be seated no later than 7:20 p.m. No ticket is required to attend the event.