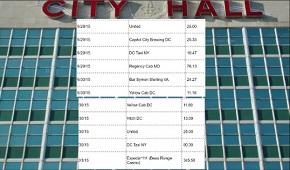 That is essentially the message from the Desiree Charbonnet’s For Mayor campaign in the ongoing LaToya Cantrell’s credit card controversy.

Charbonnet and Cantrell are the remaining candidates for New Olreans Mayor opening.  The election is November 18.

Last week, news broke that Cantrell, who has been leading in the campaign according to the primary election results, had belatedly reimbursed the city thousands that were charged to her City of New Orleans credit card.  Cantrell claimed that there was gray areas in the law and the reimbursements were after their auditing of the expenses.

There have been allegations by various supporters of the Charbonnet campaign that the unreimbursed amounts might be upward forty-thousand dollars.

Today, the Desiree Charbonnet campaign released the following statement which would indicate that aside from the late reimbursements to the city that were announced last week, there were additional personal expenses over and above those previously disclosed.  According to the Campaign the below are just some of the travel expenses. In an email response to me, the campaign said that more would be coming that.more would be coming that amounts " just north of 40,000.  Here is the Charbonnet statement:

On Saturday, councilmember Latoya Cantrell, beleaguered by days of questions about her illegal use of a City of New Orleans credit card for personal and campaign expenses, provided the media a “complete” list of trips on which she used her city credit card.

But that list was inaccurate and radically deficient. Further examination of Cantrell’s credit card statements for the period 2013 to 2017 revealed additional trips she failed to report and also travel expenses she claimed to have reimbursed, but didn’t. The trips Cantrell withheld from her list:

What makes all this travel worse is that Cantrell used taxpayer money with no accountability, taking a trip to Africa, staying at a lavish casino resort on the Gulf Coast, and visiting her husband’s hometown of Detroit—all without any indication that city business was transacted.

Furthermore, on two trips she earlier admitted were personal and, though it is illegal to put personal charges on a city credit card at all, claimed to have reimbursed the city, she only partially reimbursed the city. The list of charges she still has not paid back to the taxpayers of New Orleans is below.

Charbonnet campaign senior media advisor Kevin Stuart said of the list, “Every day, there’s a new revelation of Latoya Cantrell’s lack of integrity and honesty. This time it’s taking personal trips on the backs of the taxpayers of New Orleans. The whole episode tells the voters everything they need to know about Latoya: she abused their trust, used their money as if it were hers, and she continues not to be honest with them about it. Given the criminal implications of this activity and her long track record of financial mismanagement, I continue to be amazed at how cavalier she is.”