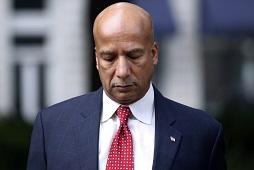 While the New Orleans Mayor's race has focused on personality flaws, corruption, one of the issues that has really yet to surface in the public debate is "gentrification".

This topic was a "hot button" discussion in 2005 and 2006 during the first mayor's race and city elections, post-Hurricane Katrina.  At that time, there was a serious question whether African Americans would be able to come back into the city with the same dominant numbers that existed prior to the catastrophic storm.  For a few years, in fact, those unable to find housing were blacks.  This changed once rebuild went into full motion.

When then-Mayor C. Ray Nagin said the city would be "chocolate city", the election became super-charged--as race, in its harshest terms was exposed.

During the New Orleans rebuild, the debate turned into whether various neighborhoods would become green spaces. Those that were targeted were African American areas.

Public housing, dilapidated over the years, was torn down during the reconstruction process and in its place were new attractive construction mix-housing dwellings.

Now, the major thrust and debate is over the gentrification process, a topic of discussion not unlike what is occuring in other cities such as Portland Oregon.

One of the forces that impacts a destination city such as New Orleans is AirBnB,  Huffington Post focused upon this in a recent article.