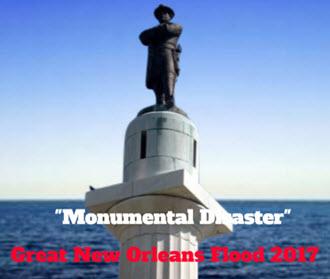 The Landrieu Administration found itself flatfooted last weekend when parts of the city flooded. While the heavy rains that swept the area obviously set the stage for the semi-disaster, as time went on it became clear failures by the city’s quasi-autonomous Sewerage and Water Board, controlled by Landrieu, bore the major fault.

From the time waters began rising clearly something seemed amiss. For example, an area essentially dry in aftermath of Hurricane Katrina, the corner of Dauphine and Esplanade, took on a couple of feet of water. (Looking out my window at that intersection 29 years ago during Tropical Storm Beryl, no water accumulated there.) Over queries prompted by events like these, Administration figures kept insisting collection and drainage mechanisms worked correctly. Then-Executive Director of the SWB, Cedric Grant, hypothesized climate change had caused the flooding.

The next couple of days proved otherwise. City Council interrogations revealed that several pumps, partly for mechanical reasons and partly because SWB generators delivered insufficient power, worked at only half-power. Worse, the loss of capacity disproportionately affected certain neighborhoods, exacerbating flooding in those locations. By then, Landrieu had returned from an undisclosed location, two days after the event.

Unwilling to cheapen his assertion made during his State of the City address earlier in the year, Landrieu initially averred that climate change might have “a little bit to do” with the inundations, but as more information surfaced he became increasingly agitated. By the time of the Council vetting yesterday, he decided additional heads had to roll after Grant announced his resignation through retirement.

But he didn’t force out people, including former Public Works Director Mark Jernigan, for incompetence. Rather, he said deception about the causes prompted him to push for resignations and sackings.

Which is nothing more than self-deception on Landrieu’s part and an evasion of responsibility, who himself apparently saw no reason to end his secret commiserations early and return to oversee the city’s response to the high water. Even as the intensity of rainfall would have filled streets, a properly-working system should have prevented water rushing into residences and businesses, an admission Landrieu loathed to make.

In reality, this flooding was an entirely man-caused disaster. Why was pump maintenance performed right in the heart of hurricane season? Could not pump repairs have occurred more expeditiously in advance of hurricane season? Why was SWB power generation insufficient? Why were there so many communications problems hampering a coordinated response? These conditions seem likely products of bad decision-making more than anything else.

And it’s not like there weren’t warnings sounded about poor agency performance in regards to flood control. Only a couple of weeks before, Councilor Stacy Head publicized the city’s slow response in cleaning catch basins, over which Jernigan had authority and who could not answer why little progress had occurred concerning that, despite that already having manifesting as a problem with waters rising during usually inconsequential downpours.

A few years ago, voters changed SWB governance to give the mayor full control over it, by his leading the Board and appointing almost all of its members, subject to nominations from various sources. What you see from both SWB and Public Works is wholly generated by Landrieu, who prefers paying more attention to pursuing an Islamic State approach to the city’s historical monuments than to ensuring government fulfills its basic responsibility to keep people and their possessions dry.

This flooding is on Landrieu, specifically his policy preferences, personnel decisions, and leadership abilities. Less ideological grandstanding on issues such as monuments and immigration might make him focus better to make smarter choices in the future on this and other issues.