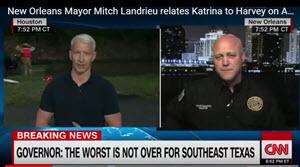 As Tropical Storm Harvey made its devastation throughtout Eastern Texas, Houston, Beaumont, Port Arthur and Lake Charles Louisiana, the memories of Hurricane Katrina became that much more vivid to many.

Certainly, to both Anderson Cooper and to Mitch Landrieu, the current New Orleans Mayor, who discussed those comparisons on Anderson Cooper 360 Wednesday night, one day after the Katrina Anniversary year 12.

Cooper opened up the interview by saying to Landrieu,

“You helped bring New Orleans back from the brink; you helped make Mew Orleans the extraordinary city it is now, as you see what's happening here in Houston and elsewhere in Louisiana and Beaumont and Port Arthur, what goes through your mind tonight?

Landrieu, who had helped rescue victims from the Katrina waters replied, “It’s really unbelievable, you know, those images, they’re hard for us to watch for us, actually.

Now you interviewed me twelve years ago and it was just incredible to watch these individuals go through what we went through.

For those who were in the water, helping people out, you saw the most unbelievable tragedies that you can imagine, yet at the same time, miraculously, you saw people who would just walk across the street from others normally helping each other out and it just lifted your spirit about our capacity to help each other in our darkest hours.

So even though it is hard to watch, you’re witnessing this in real time how human beings can really rise above the differences and reach down and lift each other up, and it's just incredible, painful but just incredible.

Cooper then discussed how New Orleans received so much assistance from all over the world and asked Landrieu, based upon his own experience, what he would say to the people of those cities who are now suffering intensely.

I would say a couple of things to the people of Houston and Port Arthur and Beaumont and Lake Charles (Louisiana), I know it is hard right now, I know it is painful, I know you're scared, I know you're frustrated, I know you feel like you've lost everything, but there's going to be light at the end of the tunnel.  You can actually see it happening as you speak. and the truth of the matter is, New Orleans could never have come back on our own. we relied upon the great help of the federal government but the faith based community, the not for profits, kids from all over America came and helped lift us back up and essentially, that's where you get the great hope for our country.  You know we're going to survive because of what you're actually seeing on the ground right now, tragic that it is and it is going to be ok.

And the one lesson we learned that really transcended everything else is that in our darkest hour, we're all in the same boat, we're all the same and it's just an amazing thing to be apart of. It hurts but at the end, at the end of it, there's a rainbow and it's going to get better.

More in this category: Louisiana's Cajun Navy, 1 way to repay Texas, Houston for Katrina aid »
back to top