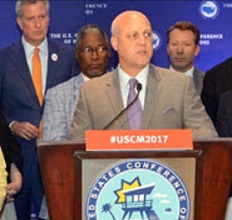 Will President Trump's Affordable Care Act Executive Order help or hurt Louisiana and the City of New Orleans? Discuss this below

“The president’s executive order to eliminate the Affordable Care Act’s consumer protections and to dismantle insurance rules is not about creating a free market. It is a devastating, undermining blow to an already fragile marketplace and would make it more difficult for individuals with preexisting conditions to secure affordable health coverage.
While a group of republicans and democrats in the Senate are working hard to ensure healthcare access for all Americans, the President once again is putting politics over the needs of millions of Americans.
Mayors are leaders on the ground who understand the human toll a lack of access to or unaffordable insurance has in the lives of the American people. That is why mayors of both parties from every region in the country strongly reject the President’s action and fully support a continuation of bipartisan work in the Senate to improve health outcomes for the American people.”

The executive action by Trump scales back the Obamacare healthcare insurance rules. It creates the opportunity for insurers to sell less expensive coverage plans than offered under the Affordable Care Act rules.

The removal of the insurance rules have been pushed by Rand Paul, US Senator from Kentucky, who voted against the recent repeal of the Affordable Care Act.
In response to the Trump order, Minority Leader of the House of Representatives Nancy Pelosi tweeted, “"I don't know what [@POTUS's] putting out today but I do know that it is a sabotage of the Affordable Care Act."