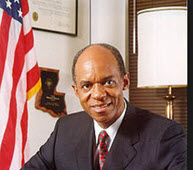 It appears that former New Orleans Congressman William "Bill" Jefferson might get a huge Christmas gift.

According to the Associated Press, prosecutors believe he should stay out of prison.  The reason? recently, many of his convictions have been overturned.

Jefferson, whose case got national publicity because of the facts that money was found in his refrigerator, represented parts of New Orleans. He also was a candidate for governor and for New Orleans mayor, losing the former to Mike Foster and the latter to Marc Morial.

Because many of the convictions against former Louisiana U.S. Rep. William Jefferson were overturned, federal prosecutors are now recommending he stay out of prison.

Jefferson was released earlier this year. Because of a recent Supreme Court decision, a judge threw out seven convictions.

The AP is reporting that "Jefferson was sentenced to 13 years and is scheduled for a new sentencing hearing on Friday. In a court document made public Thursday, prosecutors indicated they and defense attorneys will jointly recommend a sentence of time served."