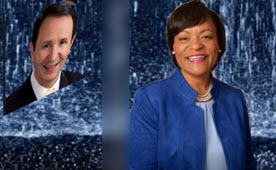 There is a cloud hanging over the head of the New Orleans Mayor-Elect LaToya Cantrell. In the campaign, she was criticized for her questionable and frequent use of a city credit card. In total, Cantrell spent $107,000 on her city-issued credit card since 2013. This was the highest total among the seven New Orleans city council members. Of that amount, Cantrell only reimbursed the city $9,000 for expenses that were deemed personal in nature. Even worse, approximately $4,000 was repaid right before she qualified for the Mayor’s race.

Despite solid evidence of improper usage, the voters of New Orleans overwhelmingly decided to elect her to lead the city for the next four years. Unfortunately, for Cantrell, she cannot just wish the scandal away as the wheels of justice turn slowly.

The first raindrop on the Cantrell parade occurred during the campaign when an anonymous criminal complaint was made. Eventually, the case was given to Louisiana Attorney General Jeff Landry. Orleans Parish District Attorney Leon Cannizzaro decided not to handle the complaint because he endorsed Cantrell’s opponent in the Mayor’s race, former Judge Desiree Charbonnet.

Landry is now investigating Cantrell’s credit card use and has issued subpoenas for her bank records. However, the investigation almost hit a roadblock as six Orleans Parish Criminal Court Judges refused to sign Landry’s subpoenas. Most of them cited conflicts of interest in the case, but an even bigger problem is that Harry Cantrell, the Mayor-Elect’s Father-in-law, is the Magistrate Commissioner of the Criminal Court. Eventually, Judge Camille Buras signed the subpoenas but immediately recused herself from the case as well.

This dilemma is undoubtedly why Landry is asking all Orleans Parish Criminal District Court judges to be removed from the case. On Friday, Chief Judge Laurie White will hold a hearing on this request. She also placed all pleadings in the matter under seal.

In his request, Landry noted not only the connection to Harry Cantrell, but also the $3 million in annual funding the court receives from city government. In addition, the court operates in a city-owned building. Due to these conflicts, Landry is requesting the Louisiana Supreme Court appoint an ad hoc Judge to preside over the investigation and potentially the prosecution that may result.

Obviously, an impartial judge needs to be appointed to this case. Otherwise, there will be too many questions about favoritism toward the incoming Mayor.

Landry is handling this matter in a thorough and fair manner. First, he needs to gather the evidence and that effort was almost stopped by Orleans Parish judges. An independent judge will remove all questions about preferential treatment and allow this matter to be investigated properly.

It remains to be seen whether Landry will find that Cantrell was involved in any criminal activity. It is a whole other issue whether she would be convicted if eventually indicted in this case. Nevertheless, until it is resolved, New Orleans voters may be wondering if they made a serious mistake.

Jeff Crouere is a native New Orleanian and his award winning program, “Ringside Politics,” airs locally at 7:30 p.m. Fridays and at 10:00 p.m. Sundays on PBS affiliate WLAE-TV, Channel 32, and from 7-11 a.m. weekdays on WGSO 990-AM & www.Wgso.com. He is a political columnist, the author of America's Last Chance and provides regular commentaries on the Jeff Crouere YouTube channel and on www.JeffCrouere.com. For more information, email him at jeff@jeffcrouere.com
Read 3054 times Last modified on Tuesday, 05 December 2017 20:32
Tweet
Tweet
Published in New Orleans News
Tagged under

More in this category: « New Orleans, one of US's top cities in attracting Millennials to live Jeff Landry vs. Latoya Cantrell: Theft, politics or prosecutorial discrimination? »
back to top