Dallas, not SI hi-jinx that cooled New Orleans Saints for a spell 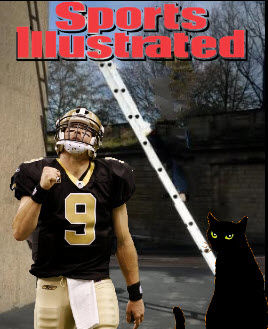 The Sports Illustrated jinx may be alive and well, as the New Orleans Saints learned last week. The Saints’ 10-game winning streak and chatter about QB Drew Brees being the hands-down favorite to win the NFL MVP award prompted the magazine to put Brees on the cover. Well, we all know the peculiar things that happen to athletes or teams that are featured on the magazine’s cover. Most of us say we don’t believe in jinxes, but we are the same folks who avoid walking under ladders or who turn the other way after a black cat crosses our path. But then there is this …

Last March, SI ran a cover heading into the NCAA basketball tournament featuring No. 1 Virginia. The Cavaliers became the first No. 1 seed to lose to a No. 16 seed and not by a small margin, 74-54 to the UMBC Retrievers. During the 2017 NFL season, cover subjects included Aaron Rodgers, J.J. Watt and David Johnson, all of whom had their seasons ended by injuries. In the lead-up to the 2017 World Series, SI’s cover featured the L.A. Dodgers with the caption “Best Team Ever?” The Dodgers proceeded to lose 17 of their next 22 games, but recovered in time to lose the World Series to the Houston Astros.

The 2016 MLB preview included the Mets’ pitching staff as the reason the Mets would once again be Amazin’! Matt Harvey proceeded to have the worst year of his career, Jacob deGrom started slowly before undergoing season-ending surgery, and star reliever Jeurys Familia was arrested for domestic violence.

Closer to home, LSU fans might remember the 2015 cover that featured RB Leonard Fournette and the 5-0 Tigers who followed up the recognition by losing three straight games and knocking themselves out of playoff contention. Maybe it’s in our DNA since New Orleans reputedly leads the league in haunted houses, garlic crucifixes and Voodoo priestesses, but is there really an SI cover jinx? I would prefer to think it was more a relentless Cowboys’ pass-rush that contributed to a rare off night between Brees and his receivers than it was spectral upsurges traveling through the vapor.

I’m hoping the 13-10 loss at Dallas that ended the Saints’ 10-game win streak does not mean bad things to come as it did for two earlier versions of the Black and Gold. After a frustrating 34-33 loss to San Francisco in the 1988 opener, the Saints won their next seven games only to have the streak stopped by the Rams, 12-10. After the streak, the Saints went 3-5 to finish 10-6 but lost the divisional tie-breakers and missed the playoffs. In 1991, the Saints won their first seven games, but after a 20-17 upset by Chicago in the Superdome, they went 4-4 and lost a heart-breaking 27-20 playoff to the hated Falcons.

I’d rather the Saints handle it as they did in 2009, winning their first 13 to clinch the home-field advantage then losing their next three basically meaningless games before defeating Arizona and Minnesota in the conference playoffs and Indianapolis in the Super Bowl. Yeah, that would work!

I’m proud of my Kentucky Wildcats for their 9-3 season and New Year’s Day appointment with Penn State in the Citrus Bowl. When Coach Mark Stoops came to Lexington six years ago, he installed a program that has shown improved performance each season and is now in the conversation about SEC football contenders. Pass rushing LB Josh Allen will be drafted in the NFL top ten next spring and RB Benny Snell could go in the first two rounds should he forgo his senior year. And, for the first time in years, Kentucky should have another handful of players who will hear their names called on draft day. Despite all this, Cat fans are stinging that Florida, with the same 9-3 record, is ranked ahead of No. 14 Kentucky and will appear in one of the so-called “New Years Six” bowls although the Cats beat the Gators in Gainesville. Leaving my emotion at the door, I will only say that if Kentucky had beaten Florida in Week 10 instead of Week 2 AND not lost to a miserable Tennessee team, things would have been different. Wait ‘til next year!