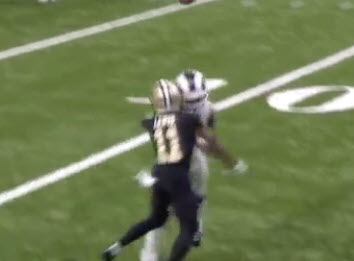 There are three ways to lose a game. First, you get beat by a better team. You can understand that and you go back to the drawing board to get better. Second, you can lose a game with poor execution or an ill-timed mistake.  But stuff happens and you can understand that. Third and the worst of all is when you do nothing wrong, your execution is good enough to win but you get it taken away from you. And that’s the one you can’t understand nor forgive. And that’s what happened to the Saints Sunday in the Superdome.

In case you missed it, the game was tied, the Saints were driving, trying to kill enough clock to kick a game-winning field goal at the buzzer. They were one play from achieving that when Drew Brees’ pass to Tommylee Lewis was interrupted by a helmet-to-helmet mugging by Rams DB Nickell Robey-Coleman while the ball was in the air. Either side judge Gary Cavaletto or down judge Patrick Turner were in position to make the obvious interference call or, at worst, a personal foul against the defender. But instead of making the call that all America saw, Cavaletto looked at Turner and Turner looked back, each expecting the other to pull their flag, but neither one acted. No flag, fourth down, and the Saints had to kick with plenty of time on the clock for QB Jared Goff to rally his team, which he did.

The Rams tied it with 15 seconds to go, then won it in overtime. Former official Dean Blandino, working the broadcast for Fox-TV, said they missed the call. Coach Sean Payton got a phone call in the locker room from the NFL director of officials who admitted the crew blew the call. Coach Sean Payton threw off the risk of a fine and said afterwards: “They blew the call.” The Saints had the game taken away from them. So where does that leave thousands of grieving, angry Who Dats who can’t understand how the system failed them. I can’t make them feel better except to encourage them not to react the way Kentucky fans reacted nearly two years ago in a similar situation.

It was the Elite Eight in 2017 when Kentucky and North Carolina met with the winner advancing to the Final Four. But in the first half, an official named John Higgins decided to control the game. He called two early fouls on Kentucky’s three best players – De’Aaron Fox, Malik Monk and Bam Adebayo – virtually taking them out of the game for a half. The three sat on the bench for much of the first half as North Carolina took control. The Wildcats fought back and tied it with second to go but lost the game on a last-second shot. Coach John Calipari commented afterwards: “It was amazing we were still in the game after they nearly fouled out all our players.”

Big Blue Nation was angry but a small proportion of fans decided if Higgins made their lives miserable, they would return the favor. A video appeared after the game titled “John Higgins’ Sabotage of Kentucky,” featuring footage of the game and a picture of Higgins next to one of his roofing business’ trucks and a invitation to rate Higgins’ business at a Yelp-type website. A Kentucky radio show host posted Higgins’ home and business phone numbers and fans took the cue. They inundated social media and clogged the website of Higgins’ business with negative reviews and comments about his company’s work and even his personal habits. “You’re gonna pay,” one Kentucky fan wrote to Higgins, and threats and harassment followed. For his next games, Higgins, in fear for his life, hired a bodyguard. A few months later, Higgins filed a harassment suit against the radio host that is still pending.

So does that give Who Dat Nation any ideas? I hope not. The love and passion that our sports teams engender often compels us to go overboard. We can be angry, and it’s going to hurt for a long time, but let’s not be stupid. We had two officials who didn’t have the stones to make the right call in a huge game, and Referee Bill Vinovich distanced himself, saying he did not see the call. I almost wish John Higgins would have moonlighted for a weekend and been part of Vinovich’s crew. He wouldn’t have been afraid to blow the whistle.

Jim Miller's new book, "Integrated: the Lincoln Institute, Basketball and a Vanished Tradition" is now available from the University Press of Kentucky or at Amazon.com. Visit Jim W. Miller's site jwmillersports.com to read his blog.

More in this category: « Not much twitter in Mitch Landrieu's eyes as Presidential field unfolds Fans bleed black and gold yet NFL leaves Saints black and blue »
back to top