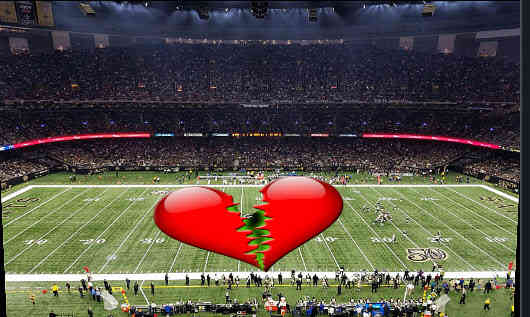 As you know by now, the Saints will host the San Francisco 49ers Sunday in a game that will break the tie for the NFC’s top seed. Both teams are 10-2 after the Niners lost at Baltimore and the Saints avenged an earlier loss by defeating the Falcons Thanksgiving night. Beating the Falcons anytime, especially after that Week 10 upset, is sweet, but I was looking ahead to this week for a special reason. I hate the 49ers.

I know hate is a very immature attitude, not Christian-like and sounding like something on a list of one who hate asparagus, buttermilk or Ben Stiller movies. Yes, that’s my list. I loathe them all. But I don’t hate any of them as much as I hate the Forty F*#%& Niners! Why do I hate the 49ers? Let me count the reasons, some of them personal!

I was privileged to be a part of the Saints first greatest stretch in their modest history, commonly referred to as the Jim Finks/Jim Mora years. Between that marvelous first winning season of 1987 and 1992, the last year before Finks backed away because of illness, the Saints won more games than any team in the league (62) except Buffalo (65) and the team who need not be named (75). The Bills were the best team in the AFC during that period, so we didn’t see them often, but the other one was in our division, making it up-close and personal.

The 1987 season was a storybook for the Saints, the first winning season in the 20-year history of the franchise. But our Cinderella rise from worst to first always seemed to be blocked by the wicked stepmother of the west. It was the infamous season when the NFLPA went out on strike after the second game and teams fielded replacement players for three games. The Saints stood at 3-2 when the strike ended and the 49ers came into the Superdome for the first game with regular players.

The visitors held a 17-3 lead in the second quarter, but three Morten Andersen field goals drew the Saints to within 17-12 going into the fourth quarter. It looked as if it might be the Saints’ day when Alvin Toles blocked a punt on the 49er 11-yard line and returned it for a touchdown and a 19-17 lead. But, as he did so often, Joe Montana drove his team down the field and stuck a dagger in Who Dat hearts with a 14-yard touchdown pass to Mike Wilson. The Saints managed another Andersen field goal but it was not enough as the Niners won, 24-22.

That result triggered Coach Jim Mora’s famous rant: “I’m tired of saying coulda, woulda, shoulda, but the Saints ain’t good enough yet.” He pledged that the team would work their "asses" off to get there, and they did, running off a nine-game win streak that included a 26-24 return victory in San Francisco and lifted them into the playoffs. The 49ers might even be credited for inspiring the Saints to their 12-3 record, but I’m giving them nothing. The Niners finished at 13-2 and had the first-round bye, leaving the Saints to be upset by Minnesota in the wild card game. I hate’em!

More San Franagony followed the next season as early as the opening game. The Saints started strong and took a 17-10 lead into halftime. But Montana dominated the third quarter with three touchdown strikes (two to John Frank and one to Mike Wilson) to give the visitors a 31-17 lead. The Saints roared back in the fourth quarter behind QB Bobby Hebert whose late touchdown pass to Brett Perriman made the score 34-32. Sounds like time for the two-point conversion today, but in 1988 that device was still six years away. A Morten Andersen extra point left the Saints short in a 34-33 loss.

The Saints and 49ers went on to identical 10-6 records, but the return match on the West Coast resulted in a 30-17 49ers victory and the playoff tie-breaker. Ten wins and we were done for the season. I hate’em!

What might have been the worst offense came in 1994 after we were competing with the 49ers for free agent Deion Sanders. I was chief negotiator and had offered Sanders' agent a five-year contract that would have made him the highest-paid defensive player in the league. But out of the blue, Sanders signed a one-year contract with the 49ers. Owner Tom Benson called it a "Mickey Mouse" move by the 49ers and the bad blood between the teams boiled hotter.

As luck would have it, our next game was at San Francisco. The Saints held a 17-13 lead and had the ball in the fourth quarter. Sanders had not done much to hurt our efforts until QB Jim Everett threw a sideline pattern that Sanders read like a Playboy magazine. He snatched the ball and headed the other way, high-stepping as he went, for the winning touchdown! When the gun sounded, the 49er management mocked the losing team with the theme from the "Mickey Mouse Club." Boy, did I hate'em even more!

I had long left the team, but my loathing returned by the 2011 playoff game when both Saints and 49ers came into the game with identical 13-3 records. The 49ers led 23-17 when QB Drew Brees drove the Saints to their first lead of the game with a 44-yard touchdown strike to Darren Sproles with 4:02 remaining. San Francisco QB Alex Smith somehow escaped the Saints pass rush for a 28-yard TD with 2:11 to go. But Brees did what Brees does and hit Graham on a dramatic 66-yard score and the lead with 1:37 remaining. Unfortunately, Smith was his equal that day and drove the 49ers down the field, hitting tight end Vernon Davis on a heart-breaking 14-yard pass with nine seconds left. Shades of the past! I hated them all over again.

So you get an idea why I feel the way I do? If the Saints win on Sunday, I will celebrate the local heroes as the losers slink out of town. If the Mickey Mouse 49ers win? I’d rather drink an asparagus and buttermilk Smoothie while watching a Ben Stiller movie.