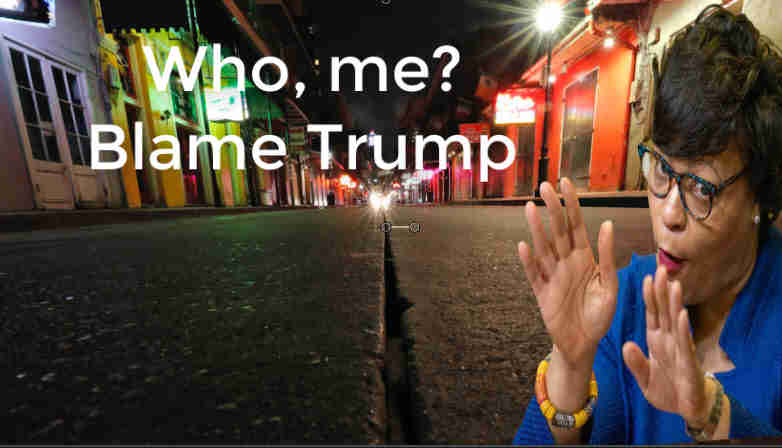 Questions are being raised about why New Orleans is ranked so high on the list. Of course, some analysts are pointing to Mardi Gras as the culprit. There were over 1.2 million local citizens and visitors crammed onto the streets of New Orleans for the multi-day celebration in late February, so the coronavirus connection seems clear.

While Mardi Gras is probably one of many reasons why New Orleans has been hit so hard by the coronavirus, New Orleans Mayor LaToya Cantrell, a progressive Democrat, is not accepting any of the blame. In media interviews, Cantrell has focused her ire at the federal government, practically blaming President Donald Trump personally for the problem.

In an interview on Thursday with Wolf Blitzer for CNN’s show “The Situation Room,” Cantrell said, “When it's not taken seriously at the federal level, it's very difficult to transcend down to the local level in making these decisions.” She said she was not given “clear direction” and there were “no red flags” about holding Mardi Gras. According to Cantrell, “if we were given proper direction, we would not have had Mardi Gras and I would have been the leader to cancel it.”

This is a convenient and selective analysis by Cantrell. She did not mention that the President stopped all air travel from China four weeks before Mardi Gras. Two weeks before the event, Dr. Nancy Messonnier of the Centers for Disease Control and Prevention (CDC) said Americans “should be prepared for this new virus to gain a foothold in the United States.”

In February, no one knew exactly how prevalent the coronavirus would become, certainly not the President of the United States or any politician. As the outbreak has worsened in New Orleans, Mayor Cantrell is looking for a convenient scapegoat, like New York City Mayor Bill DeBlasio and other liberal leaders across the country. For Democrat Mayors and Governors, President Trump is an easy target.

A better approach would be to acknowledge what the President has done to deal with the crisis. In the case of New Orleans, the President was not unresponsive to the city and state’s needs. He approved a federal disaster declaration for Louisiana, making the state the fifth in the nation to qualify for additional federal funding. The federal government is currently providing financial support for three coronavirus testing sites in the New Orleans area and provided almost $40 million in financial resources through the Stafford Act and the CDC.

Along with the Mardi Gras celebration, other factors certainly have played a role in New Orleans being at the top of the coronavirus list. The city has many homeless people and citizens with inadequate healthcare and housing. In New Orleans, there is a high poverty rate and a huge number of people have preexisting conditions which make the coronavirus even more severe.

It would be easy to blame Mayor Cantrell for not addressing the underlying economic, healthcare, housing and other problems which contributed to the spread of the disease. However, instead of blaming any political leader at this point, a better course of action is for the politicians to start working together and supporting President Trump as his coronavirus task force deals with this emergency.

Launching political attacks on President Trump on a liberal cable television network may help Mayor Cantrell with her base of voters in New Orleans, almost all of them loyal Democrats, but it will not help stop the spread of the coronavirus. The only way to lessen the spread and mitigate the damage from the virus is for there to be cooperation among citizens, businesses, government agencies and vigorous support from the federal government.

Mayor Cantrell should realize that insulting President Trump on national television is not the best way to foster close cooperation from the federal government. Let’s end the nasty political blame game and start working together to deal with this disease. Scoring cheap political points is always distasteful, but it is especially offensive when lives are in danger.

More in this category: « Nothing better than Louisiana's Politics with a Punch, Thursday March 5 Why is Covid-19 hitting Louisiana and New Orleans area so harshly? The numbers »
back to top