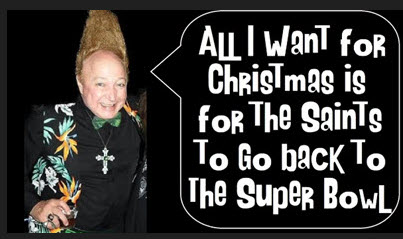 New Orleans Saints fans want to give credit to its head coach and certain players for the team’s manhandling of “Lost” Vegas.  And, to an extent, the entire defense, Alvin Kamara and others do deserve some kudos.

But folks, there’s a reason the Saints morphed the Raiders into the Raided.  Our home team had certain spiritual help courtesy of Vince Vance.   It was his prediction of Saintly angels that made the difference.

Here's what happened: Last week, Vance while being interviewed on our weekly “Louisiana Conversation” video show made a pledge to my co-host Jay Batt and to me.   He has created a thumping disco-styled music video rendition to the revered, “Saints go Marching in”.   Vince seemingly promised that if a large crowd watched his we were about to play on the webcast, Saintly angels would be so inspired, a victory at the Super Dome became guaranteed.

We played the video.  They were inspired.  The Saints marched in, the Raiders crawled out just as Vance predicted.

If Saints, angels and disco weren’t quite enough to juice up our inspiration beyond containment, his  “I am New Orleans” song we played next became the finishing touch.  That 2010 poignant creation is the entertainer’s Katrina’s 5th Anniversary love letter to a city that care just ain’t forgetting.

In fact, I have it under good authority, that his post-hurricane haunting musical filed us with such boundless love and tenacity that rebuilding New Orleans became an afterthought.

So, I present you the Vince Vance interview along with his two stirring music videos.  In the event you hear those Saintly angels finger tapping with contagion, you’ll know our road to the Super Bowl is in good hands.

More in this category: « Louisiana's Ida misery: Oil & gas everywhere but not a drop to pump
back to top