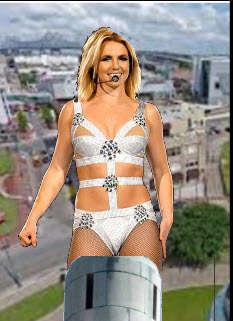 Nah, Mitch is "Toxic" in some of these parts.  It’s not time for a civil war in Louisiana, no way we should "oops, do that again", so let's move on. .

Actually, the solution is clear--one that can replace all of those rebel monuments in the state and elsewhere, none other than, honoring Britney. Spears, the singer, performer and national TV star.

After all, she'sa woman of the people.

This is a compromise in the works that everybody can live with, right?

And, she certainly is giving to others.  Her songs are a testimony to that--names such as "Piece of Me", "Make me", "Hold it against me".  Britney surely has the qualifications and the committment to her audience.

So, you think it's Crazy (which happens to be another song title)?

Well, there's already a petition started to do exactly this. This is what it says:

Before becoming one of the world's most important and influential pop legends, Britney Spears was living life in a small southern town by the name of Kentwood, Louisiana.

Not only has Britney proven her talent, but she's proven her strength of character by not only overcoming highly publicized mental breakdown, but by continuously working towards improving herself. She's an inspiration to millions.

While her contributions are too many to list here, below are a few examples of her charitable efforts to give back to her beloved home state:

- In 2006, "The Britney Spears Foundation" raised $585,000 for charity, and donated a large portion of it to Hurricane Katrina relief programmes.

- Teamed up with Red Cross in 2016 to raise money for Louisiana flood victims. Along with Ellen DeGeneres, donated $250,000 to this relief.

- Currently donating some of her Vegas ticket show sales to Louisiana schools for flood recovery. The money donated will be contributed to a state fund, which will help teachers purchase supplies and materials.

She's already earned her star on Hollywood's Walk of Fame, and now it's time for her home state to honor her with the tribute that she deserves.

Do the right thing: Replace the Confederate statues with an actual louisiana hero and influencial human being, Britney Spears

So, jump at it. Here's the link to the petition, the brainchild of Kassie Thibodeaux. Put Britney on your pedestal where she belongs.