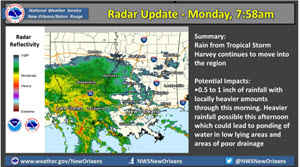 President Donald Trump has declared a state of emergency for the State of Louisiana and has ordered assistance to the state.

According to numerous weather reports, the storm has already started to create heavy rain events upon the state with more to continue as Harvey continues an expected eastern course, away from Texas.

Here is the Declaration:

Today, President Donald J. Trump declared that an emergency exists in the State of Louisiana and ordered Federal assistance to supplement State, tribal, and local response efforts due to the emergency conditions resulting from Tropical Storm Harvey beginning on August 27, 2017, and continuing.

The President’s action authorizes the Department of Homeland Security, Federal Emergency Management Agency (FEMA), to coordinate all disaster relief efforts.  This action will help alleviate the hardship and suffering that the emergency has inflicted on the local population, and provide appropriate assistance for required emergency measures, authorized under Title V of the Stafford Act, to save lives and to protect property and public health and safety, and to lessen or avert the threat of a catastrophe in the parishes of Beauregard, Calcasieu, Cameron, Jefferson Davis, and Vermillion.

Specifically, FEMA is authorized to identify, mobilize, and provide at its discretion equipment and resources necessary to alleviate the impacts of the emergency.  Emergency protective measures, including direct Federal assistance, will be provided at 75 percent Federal funding.

More in this category: « Guess who's slamming Louisiana and LSU football over race? Floods of Katrina memories, issues do Trump as Harvey's horrors flow »
back to top