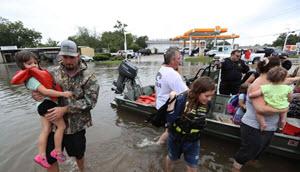 On the 12th anniversary of the costliest hurricane in U.S. history, another killer storm is ravaging the states of Texas and Louisiana. Hurricane Harvey has been downgraded to a Tropical Storm, but it is still packing a wallop. In some parts of the Houston area, over 50 inches of rain has been recorded, the highest total in history. The storm will cause havoc for at least another day before finally moving north.

While Harvey has flooded Houston, destroyed homes and caused 14 deaths to date, it has also spurred an incredible volunteer response which has spontaneously mobilized to save lives. One group that epitomizes this response is the Cajun Navy, a band of enterprising Louisiana volunteers with boats who activate during disasters to save flood victims and distribute food, water and needed supplies.

Last year, the group did an amazing job in the Baton Rouge area saving countless Louisiana residents impacted by severe flooding. These volunteers acted and did not wait for an official invitation from government officials to participate in rescue activities. They moved into a crisis zone when they saw people in need.

In Houston, there are several different Cajun Navy groups participating in rescue efforts. One leader claimed that his members faced gunfire while attempting to help people stranded in flood waters. Regardless of the obstacles, the Cajun Navy is courageously heading into danger to save victims.

It is reminiscent of the massive volunteer effort which occurred after Hurricane Katrina flooded 80% of New Orleans in 2005. In that storm, 1836 people tragically died, but the total would have been much higher without the heroic exploits of both the U.S. Coast Guard and volunteer first responders who traveled from across the country to provide assistance in New Orleans.

Both of these killer storms brought forth the best and worst behavior of ordinary citizens. After Katrina ravaged New Orleans, there were distressing reports of police deserting the city, while looters rampaged through abandoned stores. In Houston, there have been similar reports of looting and despicable price gouging.

While a few people resort to crime, far more people rise to the occasion in these types of situations. They become citizen heroes and there is no better example than the Cajun Navy.

This group is not receiving any financial assistance from the government. In fact, during their rescue operations in the Louisiana floods last year the Cajun Navy had to navigate bureaucratic road blocks. Some law enforcement personnel were perturbed by the presence of the Cajun Navy volunteers. In fact, one Louisiana lawmaker proposed a bill demanding that Cajun Navy volunteers receive permits before being able to offer volunteer services after future storms.

Fortunately, sanity prevailed and the Cajun Navy was left along by both politicians and bureaucrats. Thus, when Harvey struck Texas, the Cajun Navy set sail for the troubled waters of Houston.

The generous and courageous spirit of Americans like the members of the Cajun Navy cannot be controlled by government officials or forced to submit to a bureaucratic permitting process. Instead, they need to be given the opportunity to act in times of crisis and save lives. The best way the government can help these volunteers is to stay out of their way and let them do their jobs.

More in this category: « Louisiana city questions projects as bond ratings drop Louisiana's business community steps up after Katrina, BP other emergencies »
back to top