Why is Louisiana Democratic Party turning back on Derrick Edwards? Featured 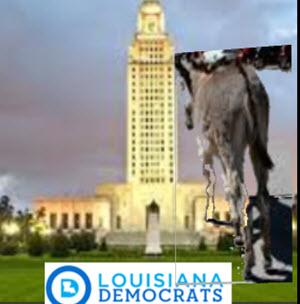 Historically, the party has abjured endorsing even those statewide candidates who show strength. In 2011, it refused to back the contestant who would garner the second-most votes in the governor’s race, Tara Hollis, claiming it did not want to coronate a candidate in a field with multiple Democrats running. But it also didn’t endorse Democrat Donald Hodge, the only opponent to Republican Insurance Commissioner Jim Donelon, where Hodge would go on to capture around a third of the vote. And in 2015, in a governor’s race with multiple Democrats running, it did endorse current Gov. John Bel Edwards (no relation to Derrick) months earlier than typical.

Below Discuss Democrats turning back on Treasurer candidate Derrick Edwards

Yet despite his good polling numbers and his status as single Democrat running, the committee gave as a major reason for denying Derrick Edwards his turning in 20 days late a required campaign finance report. Never mind that one of the party’s top officials who helped make the call on Edwards, Vice Chairman for Elected Officials Randal Gaines, has two outstanding unpaid fines.

That excuse serves merely as a mask for questioning Edwards’ electability. Having suffered defeats since 2006 for statewide office in all but two cases out of over two dozen, the party wishes not to see another endorsee go down in flames. They as much admitted this with veiled talk about how he needs to “get his house in order” and “do some basic things” before getting a nod, signaling that his effort lacks the seriousness needed before it’ll put its damaged brand on the line for him.

But perhaps even more importantly, Edwards wandered off the reservation and hit the third rail of Louisiana Democrats, insufficient ardor in growing government. The state party simply will not support a candidate that suggests state government back away, if not expanding itself, from increasing its spending and control over people’s lives.

This doomed any endorsement of Hodge in 2011, who actually raised over $100,000 for his bid then although much of that came from personal loans, because Hodge went on the record saying he wanted more market-based solutions to quell high insurance prices. Edwards states that he deserves support for treasurer (regardless that the job doesn’t address this kind of issue) because “Louisiana Politicians have a Spending Problem, not a Revenue Problem,” a view anathema to that of the elites running his state party.

By contrast, John Bel Edwards received support for what would become a field with multiple Democrats because, even as he claims he always has supported pro-life policy (contradicted to a degree by his actual record) and doesn’t entirely accept the faith of catastrophic anthropogenic global warming, he is a true believer in big government and put his money where his mouth was often as a state legislator and now governor. The lesson here is that competitive candidates won’t receive party blessings unless they demonstrate orthodoxy on this issue.

Of course, this inflexibility explains the miserable track record the party has over the previous decade-plus, the unwillingness to move to the political center on economic issues. But, as their past endorsement decisions have demonstrated, its mandarins rather would be what they consider correct on ideology than win elections.