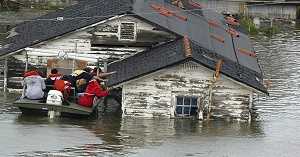 With major hurricanes recently hitting Florida and Texas, and since some parts of Louisiana are still cleaning up after last year’s torrential rains, many property owners in the Bayou State are asking if insurance rates will go up.  Will rates go up?  Is the Pope Catholic?  Does Grizzly Adams have a beard?  Of course we all will be paying more.

That’s not how the system is supposed to work. The legislature and the Insurance Department ballyhooed a concept called “modeling,” supposedly to require proper savings that would be available when a major storm hit the state.  Kind of like putting aside money on a regular basis for your kid’s college fund.

Louisiana could take a page of advice from Florida insurance officials.  And for good reason. Florida has significantly more hurricane exposure than does Louisiana.  Ninety percent of all homeowners live within a few miles of the Gulf or the Atlantic Ocean.  A hurricane crossing the Florida peninsula slows down, at best, only 15 miles per hour.  Yet in spite of all this exposure, property insurance rates are cheaper in Florida than in Louisiana.

In Perdido Key, on the Florida-Alabama border, many Louisianans have beach homes or condos.  On average, they pay significantly less on these properties than they do on their homes in New Orleans, Baton Rouge and other Louisiana cities. Property insurance rates for commercial real estate have gone down, somewhere in the neighborhood of 30% to 40%, according realtor Steve Ekovich of the Tampa office of Marcus & Millichap.

Florida officials, from the Governor on down, have made insurance affordability a front burner issue.  In Louisiana, it has been little more than a blip on the radar. Like Louisiana, Florida has a Citizens Property Insurance Company that is state created and sells to those homeowners who cannot find insurance anywhere else.  The difference is in legislative support.  From day one, the Florida Company has received state funds on a regular basis to build up reserves.  By properly managing the company, Florida Citizens has almost $ 7.4 billion in cash in the bank to pay claims according to this week’s Wall Street Journal.  There is also in place a bank line of credit and proceeds from municipal bonds that put total available funds at close to $10 billion.

Florida has also created a Hurricane Catastrophe Fund to back up and reinsurance losses for both Citizens and other private insurance companies operating in the state.   Citizens purchased this year nearly $9.8 billion in coverage. So all told, the Florida state created company has the ability to handle claims of up to $16.8 billion.

So how does Louisiana stack up?  Well, for starters, due to inept and corrupt management before Hurricne Katrina hit, no back up funds were  arranged, and Katrina and Rita claims now exceed well over $1 billion. Look up at the right hand corner of your insurace policy and you will see a surcharge all property owners pay because of the state’s mismanagement.  No other state pays such a surcharge.

There was only minor reinsurance in place when the two major storms hit in 2005. Then the state run company was  tagged with a $95 million legal judgment for failing to pay claims on time, and the former CEO for misappropriating  for his personal use hundreds of thousands of dollars. There is no wonder why the company, created by the legislature and overseen by the Insurance Department, has been called the biggest financial disaster in Louisiana history.

Has Florida solved its property insurance problems?  Hardly.  Increasing costs and continuing hurricane exposure make any effort to control insurance rates all the more challenging.  The difference between Florida and Louisiana is one of effort and priorities.  The Florida Insurance Commissioner is lobbying hard for a national catastrophic program for gulf coast states.  Florida congressmen are pushing a number of programs in Washington.

It won’t be easy, but there seems to be a major good faith effort by Florida officials to keep affordable insurance front and center.  In Louisiana, property insurance issues have faded away and are barely a blip on the perennial screen, with little comment or concern expressed by any public official. So is it any wonder why Louisiana property owners continue to pay the highest rates in the nation?

More in this category: « McConnell anticipates Louisiana's Senator Cassidy's Obamacare repeal bill for next week Louisiana's Sen. Bill Cassidy learns lesson aligning with Kimmel, depending on the left »
back to top