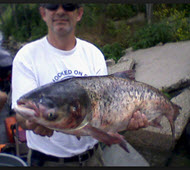 Interestingly and apparantly, carping about the Asian fish invasion in the Great Lakes should not be taken lightly. The Louisiana Association of Business and Industry, LABI, has taken a position regarding the spread of Asian Carp into the Great Lakes and surrounding waterways, although the focus of the controversy is hundreds of miles away from the state.

Below is a press release from the major business and industry organization in Louisiana.

The Louisiana Association of Business and Industry (LABI) recently advocated for a full evaluation of control measures in comments filed to the U.S. Army Corp of Engineers (USACE) Chicago District, concerning their efforts to isolate and eliminate the spread of Asian Carp into the Great Lakes and surrounding waterways.

In recent decades communities along the Mississippi River have seen the infestation of Asian Carp grow rapidly. While there is a great concern for how this species is impacting their infiltrated environment, in recent comments LABI urged the USACE to avoid implementing structural controls without supporting evidence of the effectiveness of those structural measures and a full understanding of the secondary and tertiary costs associated with their implementation.

Stephen Waguespack, LABI president and CEO stated, “Our waterways are vital to not only Louisiana companies but to commerce all over the United States. That is why we have to look at the whole picture before we jump in. To move forward, we must ascertain a full understanding of the costs associated to prevent any unintentional consequences that could permanently hinder commerce across the U.S.”

As stated in LABI’s comments, Louisiana has received a positive return on investment from the waterway industry. This commercial navigation trade is the crux of our economy and a main artery that allows the continued free-flow of commodities such as petrochemicals, agriculture, metal, plastics, and machinery from the Mississippi River to the Great Lakes. Louisiana employers, employees and beneficiaries of the state's maritime industry, therefore, asked the USACE to exhaust all non-structural options prior to building new structures, that may or may not solve the problem, in the river that will impede commerce.

LABI’s Trade, Transportation and Tourism Director, Courtney Baker stated in the comments, “While LABI supports the United States Army Corp of Engineer's (USACE) efforts to isolate and eliminate the spread of Asian Carp into the Great Lakes and surrounding waterways, and appreciate the challenges this invasive species presents to the aquatic ecosystem, we respectfully request the USACE fully evaluate the scope, cost, and impact of pathway closures and control measures outlined in the 2016 Asian Carp Action Plan developed by the Asian Carp Regional Coordinating Committee (ACRCC). LABI believes this full evaluation should advise the selected approach and consider non-structural, cost-effective approaches when appropriate.”

Read 2633 times
Tweet
Published in State of Louisiana
Tagged under