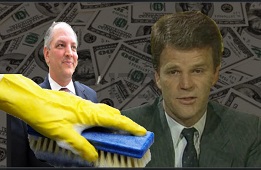 As he assumed office as governor of Louisiana thirty years ago, Buddy Roemer faced a huge budget gap left by his predecessor. The solution was difficult and was complicated by a recalcitrant legislature.  The gap was closed, and a surplus generated within the first year of Roemer’s administration.  In addition, comprehensive budget reforms were enacted to limit the probability of a recurrence of such a gap.

A similar scenario confronted John Bel Edwards 28 years later, yet two years into his administration he has made no real progress on the budget front in terms of balance or reforms.  Roemer and Edwards are very different people and the opposition to their administrations have different roots.

Roemer was, and continues to be a true reformer.  He had little regard, until it was too late, for his gubernatorial re-election chances.  Edwards seems to have been running for re-election from the first day of his administration.  Roemer attempted to buck the system.  Edwards tries to work within it.  They were both elected as Democrats.

Roemer and JBE were improbable victors in their races for governor.  Roemer came from last in the polls to the top (albeit by only 3 points) going into the 1987 primary election.  He won the general election with only 33% of the vote.  His closest competitor was fellow Democrat and three-term governor, Edwin Washington Edwards.  EWE conceded the race rather than face Roemer in a run-off – and denied him an electoral mandate.

JBE was considered a dark horse candidate from the beginning. The only major Democrat in his gubernatorial race, John Bel Edwards finished first in the primary election with 39.9% of the vote. He was expected to lose to his Republican opponent, U. S. Senator David Vitter, in the general election. Despite Vitter’s 23% showing in the primary election, and his personal problems, he was considered a sure winner in the run-off.  To the surprise of most political analysts, JBE won with 56.1% of the vote.

Roemer and JBE were each elected because people were looking for something dramatically different.   Roemer promised to “slay the dragon” and end corruption and special interest control over government.  JBE vowed to bring common sense, fiscal responsibility, and compassion for ordinary people to the office.  Roemer was strident, JBE is calm.

Governors are not dictators.  There is little they can do without action by the legislature and consent, when needed, of the judiciary.  Despite his lack of an electoral mandate, Roemer was able to quickly get a lot of good legislation enacted, mainly because the need was abundantly and undeniably clear – and he was a convenient scapegoat if things went wrong later.   A strong contingent of legislators were loyal to Edwin Edwards and bitter that he was not still governor.  While they went along with the emergency measures Roemer proposed to address the fiscal emergency and reforms including the creation of an official revenue forecast by a new Revenue Estimating Conference, opposition intensified over time.

Historically, Louisiana’s governors were powerful enough to anoint legislative leaders – an obvious plus for enacting an agenda.  The most powerful of those leaders are the house speaker and senate president. The senate is, by its size and nature, a more powerful and cohesive body than the house.  In the middle of Roemer’s term, the senate dealt him a severe blow by replacing his chosen president and returning EWE’s powerful senate president, Sammy Nunez, to that office – an office he continued to hold until he left the legislature in 1996.

Roemer proposed several progressive tax increases that failed in the legislature and the electorate, including a decrease in the sacrosanct homestead exemption.  It is no small irony that he eventually agreed with EWE’s earlier push to legalize gambling and supported an even broader entry into that sector –  the lottery, riverboat casinos, and video poker.

Roemer steadily lost political power as his term went on.  Despite pushing for and achieving hundreds of millions in teacher pay raises, he was vilified because he also pushed a teacher accountability program roundly criticized as unfair by teachers. His environmental reforms angered oil and gas, chemical, and other industries.  He was increasingly perceived as arrogant and hard to work with.

Anxious for EWE’s return, his supporters became even harsher in their opposition to Roemer’s administration.  In 1990, on the grounds it violated federal law, he vetoed a bill passed by the legislature that banned abortion even in cases of rape and incest.  The legislature overrode his veto (a very rare event in Louisiana).  The law was struck down by a U. S. District Court in 1991 for the very reason Roemer had vetoed it, but it didn’t matter politically.

In 1991, Roemer switched parties.  While the national Republican Party sent in big guns to help him get re-elected, emphasizing his scandal-free administration and his budgetary, campaign finance and environmental reforms, he never had the support of the state Republican Party, very many legislators, or the special interests he had disdained.  Quite the contrary. The state party endorsed another candidate and legislators and special interests actively attacked Roemer. It didn’t help that Roemer did not really focus on the campaign but rather continued his zeal for reform to the end. He finished 3rd in the primary and endorsed EWE in the runoff with David Duke – an embarrassing race.  He ran again in 1995 as a conservative Republican but ran 4th in the primary.

His high school’s class valedictorian, like Roemer, and a West Point graduate, versus Roemer’s Harvard education, John Bel Edwards was a conventional, but conservative Democrat.  He is the son of a southeast Louisiana sheriff, Roemer the son of a northwest Louisiana plantation owner. Like Roemer, his biggest obstacle has been the legislature, but for somewhat different reasons.

Louisiana now has a strong Republican Party that believes we should have a Republican governor.  Partisanship was not a big issue when Roemer was governor, but it certainly is now and has gotten more so since JBE became governor in 2016.  Although he had a solid record as a Democratic state representative, what seems to matter most is that he is a Democrat.  Not only do Republicans now control both houses of the legislature, but all statewide elected officials except the governor are now Republicans.  Regaining the governor’s office is a number one priority of the party and since John Bel Edwards has been running for re-election from day one he presents an easy target.

The state house of representatives openly rejected JBE’s choice for speaker.  Rather than elect one of his harshest critics (Cameron Henry who withdrew from consideration), they chose a compromise candidate, the low-key Taylor Barras – who had not even been mentioned as a contender before he was elected.  Not since Huey Long’s administration had the state house elected a speaker not endorsed by the governor, though as noted above, the state senate did unseat Roemer’s chosen president.

Nobody doubted we had a severe fiscal problem when Roemer was elected, but many would argue that we simply spend too much money today – end of story.  JBE’s Republican opposition relishes reports of waste and abuse in the media and remains unconvinced he has done enough to address them.  The governor has not specifically answered the charge he does not do enough to hold his appointees accountable for fiscal irresponsibility unless the media is relentless in reporting it.  This has not helped his case for more revenue.

JBE has proposed both revenue measures and cuts.  However, his proposals are often open to widespread criticism.  When he recommends cuts, they are dramatic and are not presented in such a way that the legislature or public believes they are the only, or the best, ways to cut the budget.  They do not seem to explicitly address the waste and abuse people read about on LouisianaVoice, in the newspapers, and see reported on television.

On the revenue side, JBE did not initially focus on proposals by the task force specifically created to present options for dealing with the “fiscal Cliff.”  That cliff has been forestalled by two years of temporary taxes. The centerpiece of JBE’s revenue proposal last year was the previously unheard of and dead on arrival Commercial Activity Tax.  The CAT constituted over 60 percent of his original package and was so watered down by the time it was actually introduced, it lost what little value it had and was quickly withdrawn.

Another year has passed, and the governor has proposed revenues more in line with what the task force recommended.  The cuts he has recommended are devastating.  His critics in the legislature don’t really like anything he puts forth and as the next election gets closer the criticism is sure to get harsher.

The governor has asked the legislature to present and enact its own proposals if it doesn’t like his.  The legislature has responded by recommending an accountability system and little else.  The proposed system seems to have been presented as a distraction from the need for immediate, concrete, and sustainable solutions.

Let’s face it.  There is nothing new under the sun.  Our fiscal status and options have been studied dozens of times over dozens of years.   The governor can recommend things all day every day, but only the legislature has the power to enact measures to authorize them.  Whether the governor has made truly responsible proposals or not, it is ultimately the legislature’s responsibility to act.  They can blame the governor ad infinitum, but the final responsibility is theirs and the excuse they don’t know enough to come up with solutions is a patently empty claim.

Roemer was able to get a lot done through the legislature in his first year when he had his best chance to do so.  JBE’s chances of significant accomplishments will apparently continue to diminish with time.  Even with the help of the most powerful and long-serving member of the legislature, Senate President John Alario, he has been unable to succeed.  A bloc of opposition in the house stymies him repeatedly.

I am of the considered opinion that we could all save a lot of time, grief, and money by simply agreeing, right now, to make permanent the temporary sales taxes currently in effect, cut as necessary for the difference, and hope for a better, more responsible future under new leadership.  A fool’s hope, perhaps, but at least everybody would be able to make plans for more than a year or two into the future – individuals and businesses.

LABI and other business interests are hypercritical of JBE and, of course, any business taxation.  In the absence of sustainable solutions how can they possibly expect vigorous business expansion and prosperity?  Future taxes are unpredictable, regardless of temporary incentives. How can they, or we, have hope our mediocre infrastructure, educational system, and other public services will not continue to decline?

Trying to ruffle as few feathers as possible in hope of re-election has not worked for JBE.  Ruffling as many feathers as possible may not have worked over time for Roemer, but we are still profiting from major accomplishments in his first few years.  He wasn’t a good politician and maybe that’s why he never got the credit he deserved.

Whether JBE is a good politician remains to be seen.

Read 2055 times
Tweet
Published in State of Louisiana
Tagged under