Paul Ryan quitting, can Louisiana's Steve Scalise be next Speaker of the House? 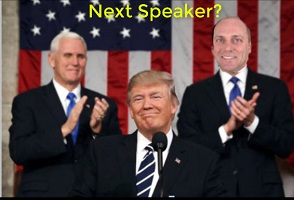 Louisiana Congressman, Steve Scalisse for US Congress's Speaker of the House of Representatives?  Is that a possibility? As of this morning, what was once a rumor is now a serious discusson since current speaker Paul Ryan has decided not to run for re-election this fall, leaving a leadership vacuum.

So, as Jim Brown and Christopher Tidmore and I were readying to discuss the Louisiana legislative session via Bayoubuzz’s Facebook, Twitter, Youtube LIVE, this morning, opportunity suddenly arose to shift gears and focus upon the “hot” and significant national news that could have a huge local impact.

Who will be the enxt speaker? Can it be Steve Scalise, now the House Majority Whip? For many in Louisiana, the notion that a Louisiana Congressman could be Speaker of the House have been unfortunate near-hits.

Of course, there is the overriding question--will the Republicans win the House of Representatives, this November. As of now, there appears to be a blue wave sweeping over the land, but seven months is a long time as the elections of 2016 has proven, that one week is seven days too long.  Then, there is the next question, would Steve Scalise run for the position and accept the spot, if available? Alternatively, should the Democrats prevail in November, what about the House Majority Leader spot, while not the Speaker, is still quite powerful?

Below is the transcript of this morning’s program and the video.

SABLUDOWSKY: Tell us about what what you know at this point in time that we've just briefly talked about in terms of Steve Scalise and Speaker Ryan.

TIDMORE: Well people have been saying for months, members of his staff close friends of Paul Ryan that he was tired he had made his wife promise to spend more time with his kids as they entered their teen years. He was working hellacious hours as you do when your speaker of the house and it was one of the promises they made his wife he wouldn't do when he assumed the office. Remember Paul Ryan didn't run for speaker so much as it was thrust upon him. And he's been thinking about it. But there had been thoughts that if Paul Ryan left the office weakened the the GOP position for reelection coming into the midterms. Well right now with 55 seats the Democrats leading in 30 it's going to take something of a Hail Mary pass to win, Paul Ryan or not. The question is is the Hail Mary pass Steve Scalise of old Jefferson. Well the fact of the matter is there's a lot of people in the caucus who believe that Steve Scalise's personal story having been shot, recovering, his countenance, his personality his ability to be sort of the anti Trump sort of aw shucks, you know, this is how it really is--might be a curative going into a very difficult midterms. Scalise himself while not denying an interest in the Speaker's job has been very blunt that he will not run against Kevin McCarthy the majority leader if Kevin McCarthy once wants the job. Understand that Representative McCarthy is a close friend of Steve Scalice's, when Scalise decided to run for Congress even before then Kevin McCarthy came down to Louisiana Scalise showed him around always in legislature and the two of them struck a friendship where McCarthy endorsed Scalise early on.

He has been a supporter of Scalise to become whip to move up through the conference and this is something that if McCarthy wants it, he gets it, he's the next speaker. However, Scalia is a lot more popular with a Trump administration than McCarthy is. There was an interesting incident recently where the president got up and everybody rose and he came out and publicly said-- McCarthy you got to go faster Scalise is up before you there. And he was in, and the president has as we saw from the State of the Union pointed out Steve Scalise, there is a question--Will the conference actually force Scalise into the. nto the Speaker's job. It's also true and I'll defer to Jim on this. that Scalise--no one knows a conference like a whip. I mean I hate to point out the house of cards example but the whip knows where all the bodies are buried but Scalise has really learned his conference--the members of the Republican Party in the House and he's extremely popular with them. So there's there's a lot of saying that there may be forced to put it that there's certainly no denying that Steve Scalise has had his eye on the speakership for some time. He's just very loyal to his friend. And Jim knows the personality of Steve Scalise and how he interacts with people even better than I.

BROWN: Follow up what Chris said. Yea, Steve Scalise could be one of the most personable elected officials that we have in Louisiana. I know that I watched him very closely at the Washington Mardi Gras ball a couple of years ago. Took my daughter up there and we stood over the side room. But my daughter who used to be a whole host on CNN's Today Show, very observant of politicians nationally, was amazed at how he related. The old Bill Clinton trick of looking someone directly in the eye even though you're surrounded by hundreds of people. And Steve worked that room in a very special way. And Campbell and I were very impressed with how well he did and that covers over to how he feels as so as Christopher said with individual legislators--with the whip, you give out the campaign cash you deal on a regular basis much more so than the majority leader does with individual members of the house. And so you build up a rapport a special relationship. And Steve's a very likable guy and then of course this huge flow of sympathy for the way he handled the shooting also plays into his favor. Two quick comment. I guess the other the downside as Christopher said is his loyalty to McCarthy and and how that will play out and how it will put pressure within the other members of Congress is to push McCarthy out. I think it's going to take a real internal push to push McCarthy aside and go with Scalise and to some people like that, think there may be a feeling of how well he's going to be able to hold up. When you have all these bullets in you like he has, he's put on a great face. But the fact remains that's got to be terribly tiring on your body. Does Steve want to take that on and go to the pressures as Christopher referred to of the tremendous day in day out scheduling you'd have to do as speaker. Is his, is his physical situation, is he capable of doing that--that's something only Steve knows whether he'll want that fact that off.  As a side note though history kind of plays with Scalise a little bit--of all the congressional districts in America the focus of Jefferson Parish line-Orleans Parish has been the focus of a lot of activity leading towards the speaker. Hale Boggs was on the track to be the speaker.  He was majority leader represented both Orleans and Jefferson Parish. Killed in a 19-- October 16th 1972. Remember it well because I was over in Paris France with some of the legislators and we got the word that Hale Bogg's--his plane went down. He was destined to be speaker of the house. And that was cut short. Then we had Bob Livingston that was ascending to the speakership. Christopher was at nineteen ninety four I believe-- that he had to step down because of problems in his personal life and very popular guy.

TIDMORE: On the day of the day of the Clinton impeachment in the house.  And that was one of the most dramatic moments in American political history. You know when they yelled, you resign. And he looks up and says, therefore I shall resign. You know it was a great moment that bad for Louisiana to say the least.

BROWN: You know there's just in the last say 35, 40 years there were a almost speaker from the Greater New Orleans area. So that's a curse or maybe three's a charm? Is this the third one is either three's a charm are a curse in terms or whether he'll rise. Very popular guy. And to you Steve I might say this I think the there'd be a lot of jockeying going on in the next several days of Steve of Steve Scalise's very very deferential to McCarthy and of course he has the first right of of of raising to the speakership but what will be the internal politics in the background of those who would rather have Scalise. What will the Trump people do. What will be internal lobby going, it's a fascinating thing to be involved in the internal debates going on within the Republican caucuses. And so there may be some, for Scalise to win,there's going to be almost a mini uprising among some of the more conservative Republicans. The Trump people, you put all that together to let McCarthy know well maybe I can't pull this off. So.

More in this category: « Louisiana Sen. Kennedy has face-time on Face The Nation, talking Facebook, Pruitt Could write a book about how James Comey, Robert Mueller hurt LSU professor »
back to top