Not horsing around, Trump's proposed budget is food for thought in Louisiana 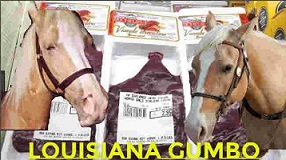 Louisiana has been called the Culinary Mecca of America.  Folks in this part of the country can take just about anything edible and make it not just good, but quite exceptional.  And when we say anything, we mean everything.  There is virtually no limit to what a Cajun will put in a gumbo. Well, because of federal restrictions, there is one thing-horsemeat.

For years, Congress has banned the sale of horsemeat for consumption in the U.S. But that could well change under the proposed budget by the Trump Administration.Now I’ll admit that most of us do not regularly run down to our local supermarket to check on whether a fresh shipment of horsemeat has arrived.  But I’m not all that enamored by eating nutria, a large rat, that is regularly publicized as a tasty dish by the Louisiana Department of Wildlife and Fisheries.  So, to each his own.

Is there a market for U.S. horsemeat?  Yes, and it’s big time in a number of countries.  “Carne di Cavallo,” can be bought in most butcher shops in Italy.  In Sweden, horsemeat is so popular that it outsells lamb and mutton combined.  In every European country you will find horsemeat to be quite popular. In France, it’s the motherlode of food delicacies, they even have a horsemeat butcher’s organization called Federation de la Boucherie Hippophagique. It’s estimated that 700,000 tons of horsemeat are consumed annually worldwide. And for good reason.

As Gary Picariello writes in Yahoo News, “a typical filet of horsemeat is similar to that of beef. The meat is leaner, slightly sweeter in taste, with a flavor somewhat between that of beef and venison. Good horsemeat is very tender, but it can also be slightly tougher than comparable cuts of beef. Horsemeat is higher in protein and lower in fat. The most popular cuts of horsemeat come from the hindquarters: tenderloin, sirloin, filet steak, rump steak and rib. Less tender cuts are ground.”

Here’s what restaurateur Jonathan Birdsall told me about possible horsemeat demand in the U.S.  “I’ll bet I could name half a dozen American chefs chomping at the bit to do things to horse back fat or loins that’d show off a delicacy few of us probably never suspected Mr. Ed to be capable of. Braised on a nice bed of pasta, maybe, with a few roasted finger-length carrots.”  Hmmm.  Think it’s worth a try?

Like I said, we eat about anything down here in Bayou Country.  I wrote a cook book some years ago that includes such delicacies as my “world famous” squirrel stew, venison goulash, possum and chestnuts, rabbit in sour cream, and Louisiana Governor Jimmy Davis’s favorite, fried coon file’.

I was traveling through Cajun country a few years ago, and stopped at a rural general store for a cup of coffee.  An old fellow was on the porch cooking up a pot of something that smelled good.  “Whatcha’ cookin’?” I asked.  “Got me a gumbo,” he replied.  I inquired what kind of gumbo, and he told me, “an owl gumbo.”  When I asked him what an owl gumbo tasted like, he smiled and said, “Oh, about like a hawk gumbo.”

Seeing that our locals regularly eat alligator sauce piquante, and add to a stew or gumbo just about anything else that flies or crawls, it’s hard for many of us to get too worked up over a little horsemeat.   I know that many have a special affection for the majestic horse.  But all horses eventually have to be disposed of. And the same horses that would be slaughtered in the U.S. under strict guidelines are now being shipped to other countries and both treated and killed in far more cruel ways.

It’s hard to figure why Congress has such a beef with letting someone chose to eat horsemeat.  Isn’t it really a freedom of choice issue?  Our congressmen apparently have no problem with eating Porky Pig, Donald Duck, and Bambi.  So what’s the big deal about eating Trigger and Mr. Ed?

Since we have a French background here in Louisiana, could the politicians in Washington be dangerously close to inciting another revolution by telling us what we can or cannot eat?  Instead of a big fuss being made over, “let us eat cake,” the new battle cry could well be, “let us eat horse.”