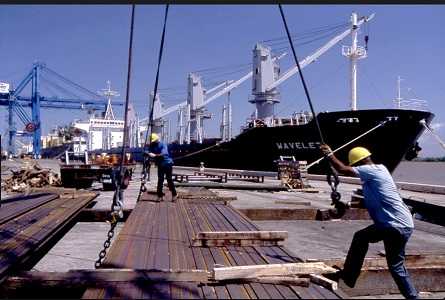 Louisiana supported Donald Trump like no other state in the country. This is Trump Country. So is Iowa, Kansas, parts of Michigan, Pennsylvania and others. However, according to many experts, including Tulane's economist Peter Ricchuitti, Louisiana is being hit the hardest now than most states and has a significant amount to lose, should the tariffs keep coming.

Ricchutti discussed this issue during the fourth segment of our Live Stream interview recently.

Below is the transcript of part four and the entire video of the interview:

SABLUDOWSKY: Okay I'm gonna see if I can at this point get a tweet, okay there it is so I'm gonna put it up unfortunately you can't see it, but I will we'll go ahead and
You are Mr. Technology Steve

Yeah I tell you like I said Al Gore has nothing on me, I taught him everything he knows.  So okay so this is from The Hill-- US pig farmers warn there'll be the casualty in the next round of retaliatory tariffs prompted by the president--so they're not very piggish on the tariffs, it looks like

RICCHUITI: Yeah and this is another example of where the state's they're seeming to take the schedule take the big hits, we're really trump supporting states, so it is is kind of a is a little bit odd, but yeah you look back Steve every time there's a oh is a problem with somebody expelling diplomats anything, the first thing to be you as the pawn is food--it's always been the case, of, whether you're a chicken processing company and and we've had a spat with Russia they're not gonna buy our chicken, and then the soybeans and all that and and that's what--two things they're, you could say well that's the middle of the country that's not us. But all that has just come down the river, so we we're as we're affected really more than, more than the pig farmer themselves because it's it's what's coming through.

I was running by the fly yesterday and it's know obviously the cutbacks haven't occurred yet, but it's it's uh it's a marvel really to see all those ships going on back and forth, and we're the we're the focus point of it all and yeah and of course we're competing with other ports, and we keep keep trying hard. And I think the thing about the port is that because there's that big wall and nobody ever sees the port and if they really saw like you get a little break like a fly and you can see the ships come it but if people saw it day to day, I think they would understand better about how trade is so important Louisiana.

SABLUDOWSKY: So ok other than the ports, who else is gonna be hurt-- assuming that the trade wars are not solved as easy as the president says that they will be?

RICCHUITI: It's it's people that it's it's very funny-- like for instance i'll give you an idea of a stock that has taken a real welp-- Thorn Industries they're a company that make those Airstream trailers, those very cool nostalgic--well they um, they make those things out of aluminum, and they've--stock is in the last, it's dropped about 20 percent, 30 percent because they see those costs coming up, and so a lot of times it's not what do you think. I think like when you--when I think of steel, I think of well first of all I think of the movie Flashdance for Jennifer Beals--so what I really think--but it's, um but that's it's really visual and you can see the sparks flying and all that, but the many many many many more people are in the fabrication side of steel, and they're getting clobbered in here. In fact their export markets are just gonna completely dry up. I mean if you had , if the Europeans put put tariffs on products coming out of--we're you using--here's the key example, that steel and aluminum, we don't make enough of it here to satisfy the manufacturers, so they're all gonna at some point, even if steel went built more plants than alumina we're still gonna be buying imported steel and aluminum. So it's not a matter of let's just keep it in America.

I really can't believe what's going on to be honest to Steve-- ten years ago I would be giving a speech, and I would say that it will put a wall around the United States, and will drive our own cars, and eat our own corn--and I just used to say that is jokingly, and and now it's happening and so I I really love to see where this goes. An excellent time to be, excellent time to be studying economics though. There's a there's a plus.

More in this category: « Trump, Macron's special bond is sealed with a Louisiana, France french kiss, of sorts Louisiana still bottom feeding under Governor John Bel Edwards »
back to top