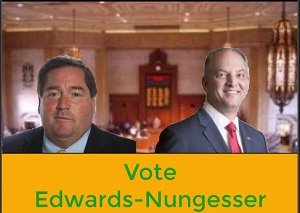 Current Louisiana Lt. Governor Billy Nungesser has brought up an interesting idea.  Have the governor and the lieutenant governor run together on the same ticket.  Such a system exists in a majority of states across the nation.

As Nugesser states:  “The ticket idea seems to work well in other states. We ought to consider it. The only way I can do the best job I can do is to have a good working relationship with the governor.”

Under the present Louisiana constitution, the lieutenant governor has no assigned duties. The person holding the office is at the beck and call of the governor.

When I served as Secretary of State back in the 1980’s, I would often make fun of my friend, Lt. Governor Bobby Freeman. If he were in attendance at a gathering, I would tell the crowd that I knew what the Lt. Governor did all day. “As best I can figure, the lieutenant governor gets up in the morning to see if per chance the governor died the night before. If not, he’s free go fishing, play bouree, or do whatever he wants.”

Freeman would always feign laughter, but the point was made. The job has no constitutional responsibilities. The legislature has put the lieutenant governor in charge of the Department of Culture, Recreation and Tourism, but do we really need to elect a bureaucrat to see that the trash is picked up in state parks and museum pictures are dusted off?

Nungesser’s suggestion of having the two offices run as a ticket actually makes pretty good sense. The governor would then have a lieutenant governor of his or her selection, and would be able to assign duties to a colleague well trusted to work together as a team effort.

Quite frankly, several other statewide offices could also be appointed by the governor as is done in a number of states. I held two such offices that could well go on the chopping block. The Secretary of State is an appointed position in 12 states and three more don’t even have the office that some refer to as a “high end or glorified clerk of court.” The Louisiana constitution requires that the Secretary of State be the keeper of the “Great Seal of Louisiana.” I was Louisiana’s Secretary of State in the 1980s. I looked for the Seal during my entire 8 years in office, but never could find it.

And how about the office of Louisiana Insurance Commissioner? Would you believe there are only 11 insurance commissioners elected in the entire country? Commissioners spend a good part of their time raising campaign dollars from the very people they are supposed to regulate. Is this the best way to assure policyholders of reasonable insurance rates?  Of course not.  I also held this elected office, and it could and should go on the chopping block.

Then there is the Agriculture Commissioner. Twelve states select, while 38 states appoint. It must make Louisianans more at ease to know that some politician is checking up on the veggies and milk that is consumed. There’s a move by a number of education groups to elect the Superintendent of Education. Oh great! Let’s put a politician in charge to screw up the education of our kids even more. Why not just elect ‘em all right down to dogcatchers and trash haulers, right?

In a time of major fiscal crisis caused by inept political oversight, does Louisiana need to elect more positions than any other state in the nation? Some consolidation would seem to make good sense for a state on the verge of going broke. The Lt. Governor is on the right track.

More in this category: « Louisiana ranks low on community colleges, women's equality, raising babies Catholic Church sex scandals has its roots in Louisiana »
back to top