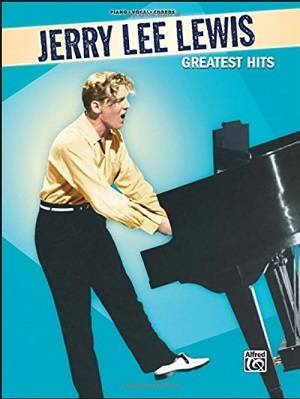 “The Killer” needs to take a break from Rock and Roll.  Jerry Lee Lewis had a recent stroke and will spend the coming months in a rehab facility near his home in Nashville.  I was looking forward to his April 28th concert at the Jazz and Heritage Festival in New Orleans, and had already lined up my tickets for his show. But that’s been cancelled.  So let me look back on a few memories about Jerry Lee.

In 1958, I was at a high school hop in St. Louis when the number one song in the country was performed.  I danced with my girlfriend to Jerry Lee’s hit, “Whole Lotta Shakin’ Goin’ On.” We played the song over and over. My favorite part was when his vocals got quiet and in a soft voice he sang:

Now lets get real low one time now
All you gotta do honey is kinda stand in one spot
wiggle around just a little bit
thats what you gotta do yeah...
Oh babe whole lotta shakin' goin' on

I play a little music myself, but I have never heard anyone play a boogie woogie piano like he could. He often played standing up and could even play with his feet, after he kicked over his piano bench. Jerry Lee was something else.

Fast forward ten years almost to that day.  I’m sitting in my office as a new country lawyer in Ferriday, Louisiana.  I had few clients so I was always anxious when the door opened. One afternoon, in walks “The Killer” himself. I recognized him immediately with that long wavy hair and pointed chin.  He didn’t need a lawyer but had a family member that was in a bit of trouble with the local game wardens. I was glad to help and that forged a long relationship with the king of rock and roll.

There were other incidents from time to time, and when a relative or friend appealed to Jerry Lee for help, I would get a call.  I never sent him a bill for my services, but I could get front row seats to his concerts. He played at a Baton Rouge club called Floyd Brown’s back in the 80s, and Jerry Lee kept my group entertained backstage for a good while after the show.

You have to admire his resiliency.  Jerry Lee has certainly had his highs and lows, but in his worse moments, he’s always had the heart and stubbornest to fight back. His popularity today continues at a high level that most star musical performers envy.

I attended a dinner in New York last year for a relative, and a wealthy hedge fund CEO came to my table and introduced himself. He had heard I was from Ferriday. All he wanted to talk about was Jerry Lee Lewis. “My musical idol,” he told me. “I even have a piano in my office, so to unwind, I play “The Killer’s music.” This guy has billions, travels the world in his own private jet, and to relax, he plays the music of a Ferriday boy who cut his musical teeth hanging out with the likes of Mickey Gilley and Rev. Jimmy Swaggart.

The three cousins all were self-taught and could each play the piano before they reached 10 years old.  They went separate directions and each found success. At one time, Rev. Swaggart (whose family I also represented) had a worldwide following, and his preaching is still watched in numerous countries.  Mickey Gilley, who did several concerts for me in my political days, was named the country singer of the year, and performs now at his own club in Branson, Missouri.

For good reason, Jerry Lee was inducted into the Rock and Roll Hall of Fame.  He is just one more of the musical legends that call Louisiana their home.  Here’s hoping he makes a full recovery and is back on the concert stage again soon.  We all want to hear again about a “whole lotta shakin’ goin’ on.”

More in this category: « Senator Bill Cassidy plays no possum with his breakfast of 'coon LSU basketball coach refused to Wade into kangaroo court scrutiny »
back to top