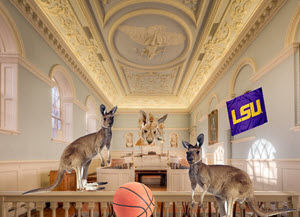 If you are a sports fan living in Louisiana, you are well aware of the rise to the top by LSU’s basketball team that won the SEC championship and made it to the Sweet 16 of the NCAA tournament.  But then the bubble burst. Not because the Tigers were defeated by Michigan State. No, the team was undermined by the irresponsible action of the LSU administration itself.

Now this is not a sports column, but a commentary of the dysfunctional leadership at the state’s flagship university.  The basketball fiasco is just one more misstep. Here is the latest in a long line of rash actions.

LSU’s 36-year-old basketball Coach Will Wade went from being an anonymous assistant at Harvard 10 years ago to winning an SEC regular-season title—all in the span of a decade.   He didn’t even play college basketball but had the teaching skills to make LSU one of the top teams in the country. Then he was blind-sided by anonymous rumors.

A few weeks ago, Yahoo Sports reported that Coach Will Wade was on tape discussing in general terms what it might take to entice a recruit to come to LSU. The tape was part of a federal investigation of sports agents paying players to attend certain colleges. But no source was cited and no one reported actually heard such a tape. The allegations were all hearsay.

LSU administrators launched an investigation as they certainly should have.  Coach Wade was summoned to a meeting following the unsubstantiated comments the next morning with the athletic director.  All well and good. But then the rules changed. Wade was told the meeting was postponed until representatives of the NCAA could be present along with lawyers from the university.  Wade should show up but with no lawyer. What was supposed to be a low-key meeting with Wade and athletic director Joe Alleva turned into a full-blown investigation. What was believed to be an initial meeting to hear Coach Wade’s knowledge of what might have taken place gyrated into a mini trial. And all this based on unsubstantiated rumors.

Any criminal attorney worth his salt would tell Coach Wade under no conditions should he appear at such a set up.  Without proper legal advice, anything said at such a meeting would be subject to subpoenas and appearances before a grand Jury.  But if you are innocent and have nothing to hide, what could possibly happen to the Coach and why have his attorney, right? Ahh! My fine naive friends, many innocent people have been framed and charged with crimes based on unsubstantiated third-party hearsay.

The judge in the federal case that supposedly references certain tapes has sealed all documents, so there is no way to determine what, if anything, was said involving Coach Wade.  So he has been left dangling in the wind, and was forced to stand on the sidelines while his LSU Tigers clawed their way to the Sweet 16.

A number of top coaches in college basketball were part of and are presently coaching fraud-plagued teams.  The Final Four Auburn coach Bruce Pearl was fired while coaching at Tennessee for lying during an NCAA investigation.  My alma mater, the University of North Carolina, is still reeling from fraud where top athletes were given high grades even though they never showed up for class. Kentucky Coach John Calipari led teams that had to forfeit two Final Four appearances over recruiting violations.  Kentucky just gave him a lifetime contract extension.

If Coach Wade is proven to have violated NCAA regulations, as have numerous college basketball coaches now employed at universities all over the country, then he should be sanctioned with appropriate penalties.  But for LSU administrators to suspend him, set him up in a kangaroo court and possibly fire him over hearsay is beyond the realm of basic fairness.

More in this category: « Whole lotta shakin’ goin’ on left for Jerry Lee Lewis of Ferriday Louisiana LSU's reinstatement of Will Wade is evidence that sports beats academics »
back to top