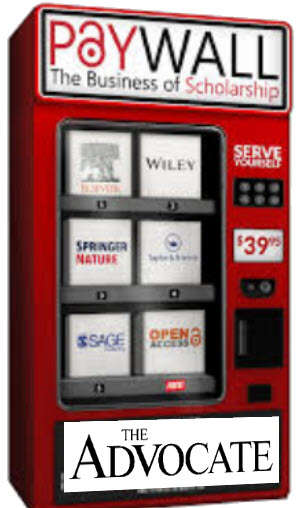 Academic research has studied the consequences of such a transition. Typically, newspapers have headed in this direction as a last resort to stem revenue losses. Keep in mind print advertising revenues have dropped by about two-thirds in just a dozen years, leading newsrooms to cut their employee numbers by almost half in that span.

This directly plays into the online pricing decision. Very simply put, consumers prefer free content access over paying for it, so a substitution effect usually occurs when people see sources of news and opinion as reasonably interchangeable. When both a paid print and free online version exist the echo one another, people go online with its much lower ad rates than pay for the print version with its more expensive ad rates.

However, typically papers don’t worry so much about the substitution effect as they do the bundling effect. This strategy seeks to make a print subscription more valuable by creating something of value – paying for an online subscription – to add onto it. This stems print circulation losses, producing a greater return on investment.

There are many nuances here – the metered paywall strategy chosen by Louisiana newspapers (a certain number of free articles per period) as opposed to a hard paywall (subscription only access) or soft paywall (some free, some not); payment structures (a flat all-you-can-consume rate vs. micropayments or limited-time access for a low fee); and whether to subvert the system under differing circumstances (for example, an emergency where the paper can perform a public service by making its content widely and freely available). But the research agrees on one point: however defining the strategy, it works only when it can attract intensely-enough interested users to view content replicated elsewhere with difficulty.

Typically, local news is the strength of newspapers (excepting the largest, “national” papers), and digital subscribers disproportionately cite this as a reason for paying to get past the firewall. It also most likely captures the casual reader, who is much more likely to stick with reading a paper after it goes behind a firewall as part of a print subscription than a heavy digital user, who also typically tend to be more segmented in their topics of interest.

In other words, a heavy user will stick with it if the outlet provides a healthy dose of whatever specialized interest he wants that he can’t get elsewhere. Insofar as coverage and opinion of Louisiana politics goes, The Advocate will see two deleterious effects under its paywall regime.

First, its traffic concerning its state politics coverage will fall significantly, because too many free alternatives exist. No major television stations in the state have a paywall, the Times-Picayune remains free for surfers, and the Associated Presshas reporters churning out state political news also freely available (some of which also appears in The Advocate). For heavy users, The Advocate simply doesn’t distinguish itself from that kind of coverage, and many will walk away after they hit the free content limit (which may be in a matter of days every month).

Second, traffic will go down dramatically on its opinion pages. A Smiley Anders with his nonpolitical commentary might be able to hold his own, but most people interested in politics simply aren’t going use up their free articles or pay additional for opinion when they value news more and can find quality opinion articles for free elsewhere.

And, the research indicates Republicans disproportionately will drop off. They trust less the avowedly-leftist slant of American media, which also to a lesser extent permeates The Advocate, and feel less charitable to lining the pockets of newspapers as a result. (And why should they trust any newspaper’s editorial page to be fair, if this is what happens?) If so, that page will tilt more heavily to the left. (This tendency as well as the now apparently-emergent financial considerations also adds another layer to The Advocate’s decision to let me go last month as one of their opinion columnists.)

Adding to The Advocate’s conundrum, as far as political reporting goes: regarding state politics, it conceives itself as the paper of record. Yet its new strategy more clearly defines it as a local paper (maybe regional, as it tries to compete in the Lafayette and New Orleans markets as well). As a result, it will become less relevant those seeking information about state government, its doings, and the politicians that comprise that.

If The Advocate loses in this realm, its decision does create some winners. The Times-Picayune certainly benefits, as statewide readers end up mostly avoiding The Advocate and turn their attention to its biggest rival. Opinion-oriented websites such as The Hayride will draw larger audiences, not only because of the commentary presented but also for consumers to see what its writers have to say about The Advocate articles that they don’t want to pay to read. And television stations in New Orleans and Baton Rouge in particular will pick up more online eyeballing for their state political news coverage.

Politicians and their hangers-on will accept the new model because they compulsively want to see what’s being said about them, and the hardest core political junkies likely will sign on (although maybe some will defect to the largely-firewalled specialty site LaPolitics, since they must pay up anyway). But the research is clear: the heaviest site users not from the local area will curtail dramatically their consumption of Advocatepolitics articles because it cannot offer a product differentiated from other free sites. In search of financial stability, it deliberately has diminished its role in Louisiana politics.
Read 3284 times
Tweet
Tweet
Published in State of Louisiana
Tagged under

More in this category: « LSU's reinstatement of Will Wade is evidence that sports beats academics Louisiana needs trust in the Stanford Group debacle fix »
back to top