They're still trying to wash Louisiana away as floods reign supreme 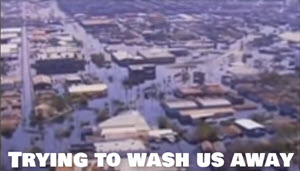 The heavy spring rains have been incessant up and down the Mississippi River, and there are projections for more Midwest thunderstorms later on this week. And all this water has, over the years, been channeled in tight levee systems that are right now under massive pressure.

Author John Barry, who has been a guest on my radio show on several occasions, documented the dangers of flooding on the Mississippi in his award-winning book, “Rising Tide: The Great Mississippi river Flood of 1927 and How it Changed America.” I asked him about his concerns today. “I know the power of this river, and quite frankly it makes me nervous to see this much water on the move,” he says

Barry also points out that “there will be a lot of backwater flooding going up rivers that are normally tributaries flowing into the Mississippi. They won’t be able to empty into the Mississippi, so the main line River will back up these streams causing a great deal of additional flooding.”

I know this scenario well from living through back water problems during the 1973 flood, where water levels reached their highest point to date. I was a newly elected state senator in Louisiana living right on the Mississippi in Ferriday, across the river from Natchez, Mississippi. I could go up on my roof and see across the main line levee as the waters continued to rise.

The water got so high that the Red and Black Rivers in that area  began to back up, flooding many communities throughout my district. Some towns, like Jonesville, were surrounded by water and local residents had to get to and from their homes by boat. At the lower end of Catahoula Parish, some homes were buried under twenty-five feet of water.

When the river along the mainline levee came within four feet of overtopping, the local sheriff emptied the jails putting prisoners to work filling sandbags to build up the levees. For four days, I occasionally catnapped while working alongside neighbors and prisoners as we tried to raise the levee with sand. When the river finally crested, there was a little over a foot to spare that kept the Mighty Mississippi from pouring into our neighborhoods and destroying our homes.

Fast forward 46 years and the river levels look to be even higher and the flooding worse. Several million acres could go under water in Louisiana alone, and a number of the parishes here have been declared disaster areas. The River is approaching dangerous heights right now, yet the projected crest in Louisiana is not until the end of May.

There are three major spillways along the river in Louisiana, and each has floodgates that have been opened to divert the raging waters. Opening these gates lessens the chance of flooding in many inhabited areas, but the process is not a panacea. The millions of tons of sediment in the waters that are diverted will wipe out any crops in the water’s path along with many homes.

Roy Dokka, a professor of civil and environmental engineering and director of the Center for Geoinformatics at Louisiana State University, says Louisiana farmers are in for a long hoe. “Any existing crops are going to be toast when you look at the damage caused to corn, sugar cane and soybeans that will be covered with sediment,” he stated. “Plus, God knows what’s in the water and what gets deposited.”

And what if the levees collapse as they did during Katrina? “That’s the worst-case scenario,” says Dokka. “If levees break, weeks could pass before engineers could reseal them. If wide-scale flooding occurs, the resulting economic damage will be felt for years, he said. “Any city that ever floods never really returns economically to where it once was because people don’t have confidence, people don’t want to put businesses there. New Orleans is the big example.”

So the south is taking on Mother Nature with a wing and a prayer. Living in this part of the country is a gamble that has consequences.  Randy Newman’s lyrics for a flood 84 years ago could just as well apply to what many residents who live along the Mississippi are facing right now, as each day passes.

More in this category: « Louisiana needs trust in the Stanford Group debacle fix Steve Scalise's soul-searching agony of forgiveness »
back to top