Louisiana throws elections but nobody comes 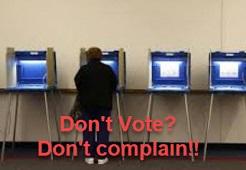 It’s like they threw a party but nobody came. That’s how election officials must have felt when they counted the ballots for last week’s statewide election. The turnout was a paltry 13.5%. Now remember that some 50% of adults over eighteen who could register have not done so. That means the less than 7% of Louisianans over eighteen bothered to show up at the polls to vote.

The New Orleans Times Picayune headlined that “We should be ashamed of the abysmal voter turnout.” But maybe that’s not the right message. Perhaps it’s the legislature that ought to be ashamed for having the election to begin with. There are five scheduled elections this year alone. Is it really that necessary to hold five different elections in one year? Of course not. And for that matter, there is really no necessity to hold any elections in Louisiana this year at all.

There is a statewide federally mandated congressional election less than one year away. Every item on the current ballot could have been held at that time without any disturbance to the daily operations of state government. The current election cost taxpayers over $6 million. There are a lot of tax dollars to be saved by consolidating election dates.

And what was so important that just had to be placed on the ballot now? A vacancy for state treasurer? The treasurer has limited duties to collect and invest tax dollars, but there are strict legislature requirements as to how the money is to be collected and spent. There is as good argument to make that the job should not be elected at all. Many states appoint the treasurer.

How about those three constitution amendments? Well, we have gotten along just fine without each of them since our last constitution was adopted back in 1973. And quite frankly, none of the three were really all that necessary and should have been handled by the legislature in its normal course of passing laws. Does anyone reading this column remember what you voted for?

But New Orleans held an election, right? Yes, but the city should tie its election date to one of the regular statewide elections beginning in 2018. That’s what most cities do all over the country. Did you read or hear of any other city or state holding an election in October? Of course not. Most elections are held at the same time as federal elections. Why should voters all over the state pay for New Orleans to have their special election date?

And how about letting Hard-Working Undocumented Immigrants Vote? Just kidding. I wanted to see if you’re still paying attention.

Why can’t our legislators make voting easier? The world has changed in so many ways. You can buy, sell, conduct business, pay your bills and taxes, and interrelate in just about any possible way over the Internet with the exception of how you vote. Why does one have to get in their car, drive to a polling location, wait in line, all just to vote? Isn’t it possible to design a system to allow voting electronically wherever you happen to be?

Oh, the naysayers will holler wide spread election fraud. I disagree. A voter could enter their social security number on a smart phone and cast their ballot. Yes, it would be possible to use a family member’s number to illegally vote. But someone who would attempt such a scheme is messing with your right to pick those who run the country and keep us safe. So stick them criminally if any attempt is made to defraud the system. How about a minimum of ten years in jail for such perpetrators?

Poll after poll indicates that Louisiana citizens have little confidence in how their state is being run. But the present system offers little incentive and too many roadblocks to make voting easier. Maybe a little creative thinking by legislators in Baton Rouge could help in getting voters out of their current doldrums. There is really not much at stake. Well, except for the future of our kids and our quality of life.

“Bad officials are elected by good citizens who do not vote.” — George Jean Nathan