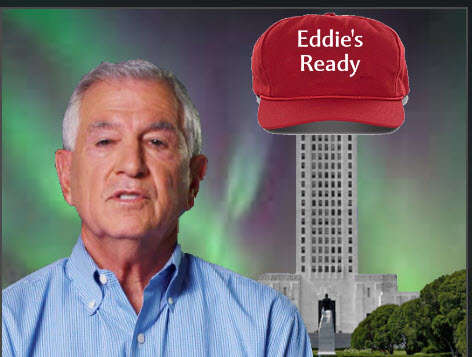 I believe we will all know a little more about Rispone in the coming weeks and months as the gubernatorial race heats up and the field is further cleared.

This week, John Kennedy, who surely would have been the man to beat our current office-holder, John Bel Edwards, decided to stay up in Washington DC and log time as the junior Louisiana US Senator. He loves that job and obviously loves getting that national TV face time.  And, apparently, the cable networks lavish him with love him, in return.

So, by default, two of the top names being discussed are Senator Sharon Hewitt and Congressman Ralph Abraham.

Abraham, a medical doctor, is no financial slouch. He was considered by many as a shoo-in as a candidate, even before Kennedy withdrew his name from consideration. Hewitt made more of a public presence during the legislative sessions.  For those who have not noticed, she might enjoy “woman” if she hopes to take advantage of the “me to” momentum.

However, neither of these potential candidates have statewide name recognition.

Rispone probably has less.  But he does have deep pockets.

He already has stated that he plans to spend about eight million dollars which can buy him plenty of name-face ID in Louisiana. John Georges, when he ran for Governor, reportedly spent ten million during his 2007 run which ultimately was dominated by the then-super star, Bobby Jindal.

Governor Edwards reportedly has 5 million in the campaign bank. Apparently, Rispone can match that and more. Of course, so can Edwards as he once again bellies up to the trial attorney and election-time bars.

Eddie Ready also has a very strong presence in the Baton Rouge and Louisiana business community. He received the Business Report Businessman of the Year Award in 2016 and receives high marks according to Louisiana Association of Business and Industry’s President, Stephen Waguespack.

He also has an impressive story to tell. He somewhat fits the Horatio Alger mold, the rags to riches, a man from humble roots who over time and with plenty of sweat and determination, is now a multi-millionaire with close ties to the state business community.

Which raises an interesting question which until recent events might have been a really serious inquiry: Is Louisiana ready to hire a non-politician (and let’s add businessman) to the highest rung in state public sector?

So far, the answer has been a resounded NO.

John Bel Edwards was not well known statewide but had the full support of the Louisiana Democratic Party. He also was a highly-considered, State Representative.

Before him, Bobby Jindal possessed the titles of US Congressman, DHH Secretary and President of the LSU University System. He also owned a spot in the Bush administration for his resume.

Kathleen Blanco was known as Lt. Governor Blanco before beating Jindal in 2003. Prior to that, she was a school teacher, a State Rep. and one of our public service commissioners.

Mike Foster was a successful business person but he also had state senator to his credentials. And, let’s not forget, an avid hunter, perhaps even more important than a government official, in these parts.

Buddy Roemer, Edwin Edwards, John Treen all served in Congress before taking on the mansion.

Jimmy Davis served as public service commissioner for Shreveport and then for the state before finding his governmental sunshine as the state’s chief executive.

Earl Long was the Honorable Lt. Governor before being promoted to governor after the resignation of Richard W. Leche.

Based upon history, there is clear evidence that Louisiana voters have always chosen a government servant before giving out the keys to the capitol’s 4th floor. Based upon long-lasting tradition, Rispone would be forced to earn his public stripes first.

That was before Donald Trump.

As we know, Trump had zero experience as a government official before being sworn in as the Commander in Chief.  His lack of public experience along with his businessman persona might have been an asset among his voters.

Might Rispone destroy Louisiana tradition and do a Trump pole-vault over the government-first service pit?

Perhaps. It won’t be easy. First, there will be competition from other Republicans. Also, John Bel Edwards is no pushover. According to Bernie Pinsonat’s recent poll, the current governor enjoys a 60% favorable score, despite having served during the worst budgetary meltdowns in decades and despite the other party hovering over, smelling blood.

Nonetheless, Eddie is ready, without government baggage and all.

The question to ask—once he pays to get known statewide, will Louisiana voters be ready for him?

We have less than a year to find out.