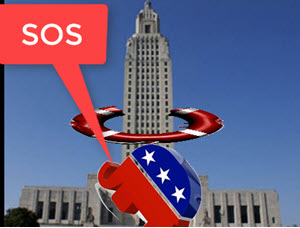 The latest poll by Market Research Insight surveyed 400 voters between August 16-19. It showed Edwards winning with 52% of the vote, followed by Congressman Ralph Abraham at 25% and businessman Eddie Rispone at 19%. The poll’s margin of error was 4%. If these are the actual results for the primary election, the Governor will win a second term and there will be no run-off needed.

Certainly, it is difficult to beat an incumbent Governor of Louisiana. It has not happened since 1991, when Governor Buddy Roemer lost in the primary election and there was a run-off between Republican David Duke and Democrat Edwin Edwards.

The 1991 race was the most high-profile Louisiana Governor’s election in history, leading to national media attention, a massive 78% voter turnout and bumper stickers imploring voters to “Vote for the Crook, It’s Important.” It was the type of unusual circumstance that allowed an incumbent Governor to lose. In contrast, the current Governor’s race is relatively boring in comparison with little voter interest.

Over the next five weeks, it is imperative that the Louisiana Republican Party, all the party’s top elected officials and the two leading gubernatorial candidates concentrate their attention on bringing down the support level of Governor Edwards.

The state’s congressional delegation needs to take a much higher level of interest in the race. It would also be helpful to have President Trump visit Louisiana before October 12 and campaign for the Republican candidates in the state. He does not need to make an endorsement, just implore voters to support a GOP candidate for Governor.

Without that type of concerted and sustained effort it will be difficult to beat Governor Edwards. He has a political war chest of more than $10 million, which he is using to advertise extensively on television and radio. One of his major messages is that he saved the state from former Governor Bobby Jindal’s fiscal recklessness and created a budget surplus. Of course, he accomplished that feat by massively increasing taxes by billions of dollars on the struggling people of Louisiana.

At least the Republican candidates are not attacking each other, which is what happened in 2015. It is a major reason why John Bel Edwards won the Governor’s race. In this election, it is another golden opportunity that the Louisiana GOP will lose if they allow Edwards to win another term.

From his liberal “tax and spend” fiscal policies to his controversial criminal justice reform proposals, Edwards is vulnerable. There are plenty of reasons for the voters of Louisiana to fire their incumbent Governor; however, they need to be frequently reminded of his record during his four years in office.

The political clock is ticking, and the anti-Edwards messages need to start now. If his opponents wait too long, it will be lost in the last-minute overload of political commercials as Election Day nears. The next two weeks will be critical and will determine whether Governor John Bel Edwards will win a second term or not.

More in this category: « Abraham commercial blames Edwards for rigs employing "no one" in Louisiana Louisiana elections: Retail politics on sale, nobody's buying »
back to top