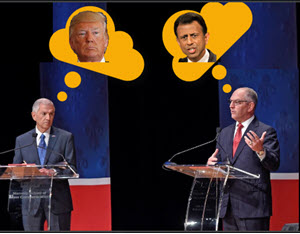 The results of the primary election on October 12 showed that Louisiana voters were rather interested in this campaign and the candidates. Either they realize that Louisiana is not doing well economically and want change, or they want four more years of John Bel Edwards as Governor. Regardless, 200,000 more voters participated in this election than in the 2015 election. It is a good sign that turnout increased despite a major LSU vs. Florida football game scheduled for Election Day.

In the Governor’s race, the incumbent, John Bel Edwards, was forced into a run-off, despite his superior name recognition and his financial advantage. It almost did not happen. Without the last-minute involvement of President Donald Trump, his son Donald Trump Jr. and Vice President Mike Pence, Edwards would have won outright by receiving over 50% of the vote on October 12.

With a vote total of 46.6%, he is close, but has work to do to reach the magic 50% level on November 16. In 2015, he won handily over then United States Senator David Vitter in the run-off with 57% of the vote. This election will be different, it will be much closer and either candidate can win.

While initial polls show Edwards leading his GOP challenger Eddie Rispone by a 52-36% margin, the race will surely tighten as we get closer to Election Day.

In this election, Rispone has several advantages that Vitter never enjoyed. Of course, he does not have the personal baggage that saddled Vitter’s campaign and made him an easy target for Edwards. Unlike Vitter, who did not receive the endorsement of either of his Republican opponents in 2015, Rispone immediately received the enthusiastic endorsement of third-place finisher U.S. Congressman Ralph Abraham.

Thus, Rispone has a united GOP heading into this run-off against the Governor. He also enjoys another major advantage that Vitter never experienced. Rispone will have the full support of President Donald Trump, who is popular in a state that he carried with 58% of the vote in 2016.

Surely, Trump will hold a rally in Louisiana before the election. He will also send surrogates to the state to campaign for Rispone. The Trump factor will be a huge advantage and one that Rispone is already touting in his first television commercials of the run-off.

In contrast, Governor Edwards is also mentioning another politician quite frequently, former Louisiana Governor Bobby Jindal. Edwards will continue to remind voters that he inherited a deficit from the previous Governor, and he will relentlessly claim that Rispone, if elected, will be the next coming of Bobby Jindal.

Thus, in the run-off, Rispone will call himself a Louisiana version of President Trump, who will rescue the state from the economic doldrums created by Governor Edwards. At the same time, the Governor will call Rispone the latest edition of Bobby Jindal who will bankrupt the state again.

Which message will be more influential with Louisiana voters? It depends on who has more money to spend, and in what way it is spent, and how involved the President becomes in the race. Unlike the 2015 election, this one will be close.