Jim Brown: The time I tried to 'hep" McKeithen at the Democratic convention Featured 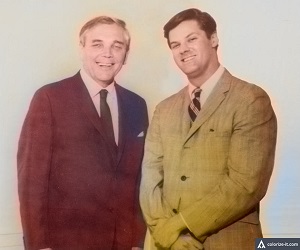 Assuming in this strange day and age, we still have political conventions this year, no one at this stage is sure just how the process will work. The old process of picking national candidates in the proverbial smoke-filled room has gone by the wayside in favor of party primaries. In the old days, candidates would spend years wooing state party leaders, who would then select delegates and tell them whom to support.

This time-worn system produced Presidents Dwight Eisenhower and John F. Kennedy. The current process gave us George Bush and Barack Obama along with either Donald Trump or Joe Biden this year. You be the judge as to which process has worked out better for the country.

My first Democratic convention was in Atlantic City back in 1964. On a summer break from Tulane Law School, I was driving my fifteen-year-old Volkswagen convertible up to New York for a summer job, and I stopped in Atlantic City on the way. The Democrats were gathering in the old civic auditorium on the boardwalk, which for many years was the site of the Miss America pageant.

I was able to park my car about half a block from the auditorium and walk right up to the front door. A guard asked me where I was going, and I said I wanted to join the Louisiana delegation.

“Are you supposed to be with them?” he asked.  “I sure am,” I said. I might have exaggerated a bit, but I really wanted to get in the door. “Well, then, welcome to Atlantic City, go right in.”

I stood about fifty feet away from the stage where President Lyndon Johnson kept the crowd in suspense until he announced that Senator Hubert Humphrey would be his running mate. Johnson was a cinch to be re-elected, and the Democrats pulled together as one big happy family. What a contrast to what happened four years later.

The next Democratic convention was held in Chicago. I was living in Ferriday, Louisiana at the time with my wife and our two-month-old daughter, Campbell. On the spur of the moment, we decided to travel to Chicago and visit old friends, so we packed up the car and headed north.

The main party headquarters was at the Sheraton Hotel, which faces Lake Michigan in downtown Chicago. Major opposition to the Vietnam War was building, and a large number of protesters had gathered in Grant Park across from the Sheraton.  I knew I could get a better view from the top of the Sheraton, so I headed for the elevator in the lobby. When the doors opened, there were two people inside: Senator Russell Long, and Louisiana Governor John McKeithen.

Sticking my hand out, I introduced myself. “Governor, I’m Jim Brown from Ferriday.” McKeithen smiled. He was visibly surprised.

“Why Jim, what are you doing up here?” he asked.

“Governor,” I said, “I came all the way up here to support you for vice-president.”

McKeithen laughed, slapped me on the back, and told me he could not be more pleased.  I later learned that the Senator and the Governor had been on their way up to Vice President Humphrey’s suite to urge him to put McKeithen on the ticket. When he was not tapped for the job, the Governor left in a huff and headed back to Louisiana.

Subsequent conventions produced numerous additional Louisiana antidotes.  I attended seven conventions in all, both republican and democrat.  I’ll fill you in on more political yarns next week.  Stay tuned.

More in this category: « Time to zoom into 21st century Congress with remote voting, meetings Turning a page on a pandemic; It's reading time »
back to top