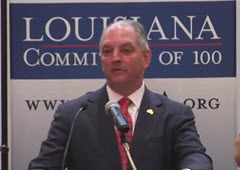 Here are some highlights:

His budget proposal will be presented in Joint Budget on January. 19, 2018.

He would like to call a special session for February, but only will if he feels confident that the Republican-led legislature will solve "fiscal cliff" during it.

He wants a revenue-neutral budget and does not plan to raise taxes.

Edwards is re recommending putting the sales tax on more things and making adjustments in areas such as sales tax exemptions.

If no decision is made on taxes, he will have to include $1 billion in cuts to the budget. Says the state needs to move away from temporary taxes, that the budget needs predictability to "so we stop this yo-yo effect."

Today, Republican Louisiana Rep. Chris Broadwater of Hammond sent a letter to the House stating that on Friday he had submitted his resignation to Speaker Taylor Barras on Friday.

"I thank God that he blessed me with an amazing wife who has been understanding and an unbelievable mother during my absence. However, I cannot continue to allow her to handle a disproportionate share with regard to our family, Therefore, it is time for me to refocus my attention on the wonderful family with which I have been blessed."

Broadwater hopes to leave office on or before March 1.