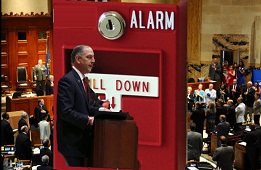 Let’s begin by getting real with where the state actually stands dollar-wise. First of all, Louisiana is one of only eight states that are losing population each year.  Over 27,000 people moved out of Louisiana last year.  Yet far from reducing the cost of government, it continues to go up at a rapid pace.  Three year’s ago, the state budget was $27.2 billion.  Today, it has jumped to $29.6 billion. Why the huge increase?

Where’s the responsible legislative discussion about more efficiency in government?  Where are the in-depth studies of how efficient current spending programs are being implemented?  Is the state getting it’s money’s worth by handing out movie tax credits, industrial tax exemptions, and numerous other grant programs?  Here’s what the GoodJobs Coalition says about the industrial tax exemptions:

The Louisiana Coalition for Tax Justice compiled all of the state’s property tax exemption records for the 1980s and published a devastating set of findings. The exemptions had cost local governments $2.5 billion. The harm to schools, the most costly local service, was the greatest. The state ranked last in high school graduation rates, while $941 million of the tax exemptions could have gone to improve the schools. Incredibly, almost three-fourths of the projects that got exempted created no new permanent jobs

It found that local governments had lost $16.7 billion in revenue over the past decade. And the cost per new job? An astronomical $535,000.

The state just announced new interstate construction projects.   Why not a speed up toll lane like they have in Texas and other states?  And as I wrote a few weeks ago, the sale of roads, buildings, sewer systems and a number of other publicly built projects are being sold or leased to private groups in more progressive states all over the country as well as the federal government. The Lt. Governor is suggesting leasing or selling state parks.  Why not give the idea a look?  Can’t we even discuss such options in the halls of the state capitol?

How about a crackdown on state highway speeding?  I feel like I’m driving in the Daytona 500 when I travel to New Orleans on I-10 or to Mississippi on I-12.  Go 80 miles an hour and cars will constantly pass you by. Speeding tickets big financial rewards for the state in highway safety. There would be money for more state troopers and other safety needs.

Financial threats to higher education?  Let’s be frank. Colleges in Louisiana, including LSU, have one of the lowest tuition rates in the country. The average tuition rate at four-year colleges, according to the Morning Advocate, is $5,620 with LSU’s tuition a bit higher.  But there are scholarships and the generous Tops program to help.  The average student debt on graduation is $27.000.  Not a big loan for a college education with years to pay it off.  Why are taxpayers picking up so much of the bill?

Many of these ideas are worth exploring and others might need to be discarded.  A financial audit is needed of every state department.  I was a statewide elected official for 20 years, and if I was forced to cut my budget, sure I would moan and complain, but I could do it.  Budget information is power, and there are ways to both save and generate more tax dollars without raising taxes.

Leadership means beginning the discussion and biting the bullet.  Time for the gang at the state capitol in Baton Rouge to step up to the plate.