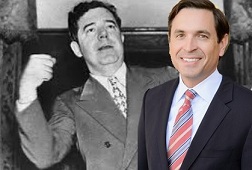 Not sure if you have noticed or not, but there is something called the fiscal cliff looming in Louisiana. If you haven’t heard of it yet, sit tight, because you will hear a whole lot about it over the next few months.

Pull some old Public Affairs Research Council of Louisiana (PAR) reports or Advocate headlines over the last 40-50 years and you will read a similar version of the same fights. Close your eyes and listen to some old political speeches and legislative debates on the Louisiana Public Broadcasting (LPB) website and you will swear the commentary is filled with the same words used today.

Our track record is clear. The same problems have been around for decades. The government designed by Huey Long and enshrined in the Constitution by Edwin Edwards is bankrupt, and all the taxes in the world won’t permanently fix our problems.

Taxpayers no longer trust government to spend money wisely. That trust must be rebuilt. It seems for that to happen; a whole new approach must be considered.

Government must stop growing so fast and actually shrink to become more in line with our economy. State government must cede some of its power and authority to local control. Taxation should be collected and kept close to the people. Spending must be more transparent and accountable at all levels. Unnecessary boards, commissions and fiefdoms should be disbanded. Many of the dedicated funds should be eliminated, thereby allowing those dollars to flow to priorities like education and health care. Medicaid spending increases must be contained, and smart reforms like work and training requirements must be implemented. Governmental pension plans should evolve to a more market-based approach just as private sector pension plans have done.

On taxes, the state must become more competitive so we can attract more jobs and investment. Any exemption or credit eliminated should be used to lower tax rates rather than just prop up unaffordable and unreformed government programs. A centralized collection system, like that used in other states, should be implemented. Income taxes target working families and drive away jobs and capital to other states. A better mixture of property and sales taxes similar to Texas and Florida, instead of income taxes, should be considered.

In the near term, for this session, it sounds like the Governor and legislative leaders are starting to lean towards a revenue solution using sales taxes rather than income taxes. While some cleaning of existing pennies is sure to be considered, they are almost certain to also renew at least a portion of the 5th state sales tax penny (this according to the House Democratic leader).

Either way, for argument’s sake, let say they end up agreeing on some way to replace the expiring $880 million from the 5th penny. If so, they should not just dump that money back into a bloated, inefficient government. Instead, they should spend it more strategically this time around.

This type of tax allocation would address the cliff by doing the following:
$350 - $400 million to help fund government as the legislature/administration see fit
$175 million to TOPS to make sure this is not used as trade bait anymore
$240 million from the increased collections this year recognized by the Revenue Estimating Conference (REC)
$200-$250 million from increased state government collections thanks to federal tax cut
$100-$150 million in government spending cuts (not from TOPS)

If this plan happens, taxpayers will pay the same amount they are paying today but instead of broken government they will get:
TOPS funded
New major infrastructure built
Old infrastructure repaired and upgraded
Consistent and stable funding for government accompanied with a requirement for reasonable amount of government downsizing

This should be tied to the passage of the following bills:
Louisiana Checkbook.com – a new website that shows where every dollar held by the state, local government and the judiciary is being spent in an easy click and read format.
A hard spending cap that annually prevents government growing out of control each year.
Reforms to Medicaid that encourage people to use this benefit wisely while seeking training and employment opportunities.
Reforms to state pension systems to make the benefit reliable for future generations and accountable to taxpayers.
Undedication of most funds that prohibit the Legislature from investing in priorities.
Demand low performing or workforce irrelevant higher education programs be downsized or eliminated.
Expanded k-12 school choice options for the working poor and those stuck in failing schools.

These are just a few thoughts. Maybe others have a better idea. If so, that is great. We at LABI are ready and willing to work with anyone on a real, long-lasting solution to the state’s long-term spending and tax code problems. We want to work with anyone ready to roll up their sleeves to fix this problem once and for all. Anyone from any political party is welcomed. Any politician still focused on the same old blame game hot-air spin used to confuse voters for generations need not apply.