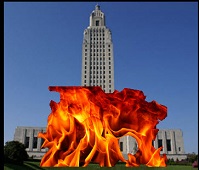 Gov. John Bel Edwards should have taken his cue from the Gipper. Instead of taking to the TV airwaves to make his case directly to Louisiana citizens, he has chosen to go it alone against an obstinate, arrogate, no-solutions-to-offer Republican legislature who, to quote my grandfather (and I’m cleaning it up a bit) wouldn’t urinate on him if he were on fire.

But while Edwards has not displayed the leadership one would expect of a West Point graduate, neither has this Jell-O-backboned legislature done anything to warrant any bouquets. The word obstructionism comes to mind immediately as a one-word description of this bunch.

There is not a shred of doubt that Republican legislators are still taking their cue from the American Legislative Exchange Council (ALEC) and Grover Norquist. Remember in 2015, when 11 legislators WROTE to Norquist to obtain his permission to vote for Jindal’s tax swap?

Since when does Grover Norquist speak for the voters of Louisiana?

But, believe it or not, this rant isn’t about the legislator’s ability to waste some $900,000 on a special session that failed to produce a solution to the looming state financial disaster. Retired State Budget Director Stephen Winham covered that in yesterday’s post.

Instead, in a classic illustration of how to violate journalistic practices by burying the lede this deep in the story, this is about legislators’ real priorities while in Baton Rouge at the governor’s call to do something—anything—to avert the fiscal cliff that awaits next June.

Citizens routinely flock to Baton Rouge during legislative sessions to testify before committees on their positions on various issues. If you’ve ever sat in on any of these committee meetings, it’s apparent that legislators are just going through the motions of pretending to listen to the voice of the people. In reality, they converse among themselves during citizens’ testimonies, walk out of the committee room to take a phone call, or generally get that patently political glazed look as they wait for the testimony to end so that the committee can proceed with its predetermined vote.

The real reason many legislators were in Baton Rouge for this session was not to tend to the people’s business but to line their own pockets, or more precisely, their campaign treasuries.

Beginning on Jan. 31, and continuing through the special session which began on Feb. 19 and until March 12 (one week from today), 41 campaign fundraisers for 46 legislators were scheduled by lobbyists, including the Beer Industry League, the Louisiana Restaurant Association (LRA), the Louisiana Oil & Gas Association (LOGA), and Southern Strategy Group in such partying-hardy locations (where the real legislative work gets done) as:

One of those, on March 8 (Thursday), for State Sen. Eric LaFleur, will feature an appearance by Gov. Edwards. Of course, the Beer Industry League keeps legislators plied with alcohol at each of these locations, thus insuring their undying loyalty when key votes come up.

It’s uncertain if the suggested contribution amounts reflect the legislator’s relative worth to the organization, but following is the schedule of fundraisers hosted by the various lobbyists:

Twenty-eight state place RESTRICTIONS on campaign CONTRIBUTIONS and Louisiana is one of those—theoretically.

Louisiana RS 18:1505.2 Q(b) also says: “No legislator or any principal or subsidiary committee of a legislator shall accept or deposit a contribution, loan, or transfer of funds or accept and use any in-kind contribution, as defined in this Chapter, for his own campaign during a regular legislative session.”

So, yes, there are restrictions against legislators soliciting or accepting campaign contributions during legislative sessions, but a close look at the wording gives lawmakers—the ones who write the laws—a loophole you could drive a truck through.

And that loophole is the words “regular legislative session.” The fiasco that ended on Monday was not a regular session but a special session. In fact, it was the fifth special session called to deal with the state’s fiscal condition, all of which failed to do so.

But campaign contributions are another matter. Where legislators are unable/unwilling to fix the state’s fiscal problems, they certainly see to their own financial well-being. And if they can do so while on the taxpayer clock for $156 per diem (Latin: per day) and mileage payments to and from Baton Rouge, so much the better. Church Lady from Saturday Night Live had a term for that: “Isn’t that special.” (Pun intended).

One observer said, “It’s almost insulting that they (legislators) even waste our time and money on these hours-long committee meetings where they are supposed to be considering the voice of the people who take time away from their jobs and families with the naïve perception that their voices actually matter when it is abundantly clear that decisions are controlled and bought by a small group of power associations. Just watch the process unfold. These groups will prevail I their positions no matter how many logical facts and explanations are presented by the other side (and often when the prevailing associations have absolutely no logical facts or explanations).”

I couldn’t have said it better myself.