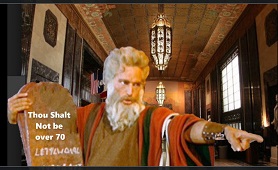 First Published on the Louisianavoice.com

Claitor can sometimes be an example of what we should expect from our legislators but far more often than not, fail to get. He also can do a spot-on Jekyll-to-Hyde transformation.

For instance, it was Claitor who filed a lawsuit to stop fellow Sen. Neil Riser’s sneakier than sneaky attempt to (illegally) inflate then-State Police Superintendent Mike Edmonson’s retirement by, it eventually turned out, some $100,000 per year.

Claitor also filed a bill way back in 2012 that would have prevented legislators from leaving the House or Senate and taking six-figure political jobs in order to boost their retirement. That bill caused Sen. Daniel Martiny (R-Metairie) to practically go slightly ballistic—possibly because he could see an opportunity slipping away for himself.

The impetus behind Claitor’s doomed bill was Bobby Jindal, who was handing out those jobs like a lecherous old man giving candy to little kids

Claitor’s bill was defeated even as it became known that Jindal had appointed former legislators to lucrative jobs for which they possessed few, if any, qualifications.

Points for Claitor for his quixotic tilting at windmills.

So, what’s with his SENATE BILL 276 in the current legislative session? Is he now acting out his Mr. Hyde role?

Claitor, who will be 57 later this year, is trying to push through a constitutional amendment that, if passed by voters, would bar anyone who is 70 or older from serving in the legislature or from holding statewide elective office.

In a magnanimous gesture of goodwill, however, his bill does stipulate that any officeholder who reaches age 70 while in office would be able to complete his term.

Wow. Thanks, I guess, from the Old Geezer Gallery. Claitor can certainly expect a Christmas card from State Insurance Commissioner Jim Donelon this year (he’ll be 74 by that time).

It’s uncertain, without time-consuming research, just how many legislators would be disqualified to hold office under terms of Claitor’s benevolent bill, but my State Representative, J. Rogers Pope will be 77 later this year and I kinda like the job he’s done for the citizens of Livingston Parish. Senate President John Alario, considered the most able legislator whether or not you agree with him, is 74 (15 days older than yours truly but don’t worry: I’m not running for office).

And there is a gaggle of legislators well under Claitor’s self-imposed age of demarcation who, based on their collective performance in addressing the state’s fiscal problems, should already be out the door well before reaching their septuagenarian years. As a group, they’ve proven themselves to be inept, greedy, ambitious, petty, obstructionist, partisan hacks—and that’s sugar-coating it.

Apparently, Claitor, an attorney, has never heard of the AGE DISCRIMINATION IN EMPLOYMENT ACT. Which forbids age discrimination against people who are age 40 or older (did I mention that Claitor is 56?).

Initially, I thought Claitor, in a snit of self-righteousness, might be aiming his bill at Secretary of State Tom Schedler, who is embroiled in a dandy sexual harassment lawsuit by a former employee (Schedler admits having sex with the plaintiff, but says it was consensual, which she denies). The entire affair (poor choice of words) has more or less captured the interest of political junkies in Baton Rouge who thought Schedler ran one of the more upstanding, scandal-free agencies until this story broke.

But a quick check reveals that Schedler is 68. He will be 70 on Jan. 24, 2020, only days after the new terms of office for state officials and legislators begin which would mean that Schedler, if he remains in office and is re-elected, would be able to complete his next term under Claitor’s proposed guidelines.

Regardless, Claitor has royally ticked off a few senior citizens who are aware of his bill. Among them is former State Budget Director Stephen Winham of St. Francisville, who just happens to be 70. The bill wouldn’t affect Winham unless he plans to run for office, but he nevertheless was rankled by Claitor’s attempt at slamming the door on those who do aspire to office but have reached the magic age of 70.

“I do not live in your district,” Winham said in an email to Claitor. “I am 70.  I take offense at this bill and I am sure I am not alone. Is this one of those bills where you are trying to punish an individual elected official or do you really believe ALL of us who have reached age 70 are senile or otherwise incapable of serving in public office?”

Claitor was less than diplomatic in his response to Winham:

“I am glad you take offense to SB 276. I will assume that you also take offense to requiring judge’s (sic) to retire at age 70. Please stay tuned to the debate. Thank you.”

Besides his apparent inability to correctly spell the plural of judge despite holding a law degree (it doesn’t take an apostrophe, Dan), Claitor also appears to have a propensity to be a bit snotty with critics. Not a good trait for an elected official.

Stay tuned, folks. The “debate” should be interesting.