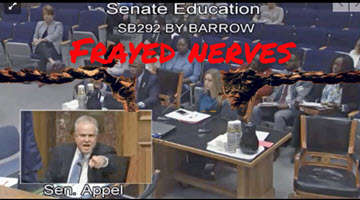 Earlier this year, Louisiana legislature met in a special session to grapple with a “fiscal cliff” short-fall of nearly one billion dollars. The gap, this spring is due to the expiration of a penny sales taxes and exemptions imposed by the legislature two years ago after prior governor, Bobby Jindal, a Republican, left office in a fiscal mess.  The anger has become exacerbated by the continuing budgetary crises of deep cuts and taxes raised and a number of special sessions called to address the continuing crises that predated Jindal’s departure.

In questioning Crisp, Jim Brown, who spent 28 years at the Capitol, asked Crisp about the seemingly tense environment. In particular, he referred to a recent confrontation between a black lawmaker from New Orleans and a white, from Metairie.

As the Advocate reported:

Bouie complained that charter schools badly need scrutiny, and that African American students were suffering as a result of the charter school "experiment."

"This is the big elephant in the room," Bouie said. "It appears the only place the benign neglect occurs is a majority African American district."

"Sir, let me tell you something. You are so far off base with your racial comments. It's disgusting," he told Bouie.

The senator said he was tired of hearing similar comments year after year.

"If there is a bunch of kids out of work that are 24 years old, it is because the goddamned city does not produce jobs for those kids," Appel, said, a reference to New Orleans.

Bouie said a recent study by Tulane University concluded there are 24,000 people ages 16-24 out of work in New Orleans. "They were youngsters who came through the experiment, charter schools," he said.

Bouie said most public school students in New Orleans are African American. "And that is true, Sen. Appel, whether you like it or not," he said.

Bouie heatedly objected to Appel's comment that Bouie had accused lawmakers of racism.

"Don't take it personally," Bouie said. "Did I call you a racist?"

Here is the transcription and video relevant part of Crisp interview:

BROWN: We've seen some very heavy vocal confrontations, that I think your paper played out today involving a senator Appel and legislation involving charter schools,  give us your view am i misjudging that or is this really a very divisive time at the State Capitol

CRISP: I've talked to a lot of members over the past week. I am working on a story that will be running in The Advocate this weekend about this topic and just about everyone kind of gives the same analysis you know when I ask them do they feel like things are particularly tense right now or acrimonious, everybody says that that they're feeling it.  Monday night the house was in session till after 8 o'clock at night on bills that you wouldn't think would keep them there on you know a week into session that late at night for anybody who knows how the legislature works.  They don't tend to stay that late in the evening especially not this early in the session, so it--and a lot of it was you could tell it was just there was tension at one point.

Representative Ted James from here in Baton Rouge from the well he called for everybody to kind of "just chill out a little bit" because you could feel the tension in the room.

BROWN: What what do you think,if I could follow up with you on this--is the tension  a anti--view pro-view involving Governor John Bel Edwards, do you sense--is it a Republican versus Democrat?  Where is the division?  Is it black, white? Or is it a combination of all those things?

CRISP:I think that, from talking to members, trying to get at this issue, people feel like there's just it's just kind of all over the place, and more than anything, it's I think that there's some--I spoke to one member who described it as right now they all kind of feel like they're in a hangover after the end of the special session and just collapsed so spectacularly nothing really coming out of it. They spent two weeks in the capitol, constantly trying to pass something, and nothing passed.  And for some that was a victory to not to not pass anything ,but for a lot it was like what were we even here for?  So now, only have a couple of days off, before they had to come back into the the regular session, I think that everybody's just a little tired of being in the capitol and kind of feeling like they're dealing with the same issues, constantly.  I mean for two years we've heard nothing but--shortfall, shortfall, shortfall--it's always about a billion dollars or something and and it just kind of seems like it's always the same debate, always the same argument, and I think that that's really what's kind of strayed some nerves