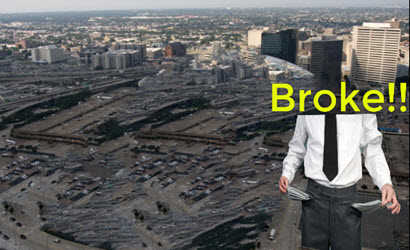 We're all familiar with "Build it, They will come"

But, what if? What if we, the State of Louisiana, stopped funding our beloved professional football and basketball teams's existence in these parts, in what some might call, pro sports "pay to play"?

Familiar with "Fund us, or we will go"?

Unfortunately, and ultimately, subsidizing pro teams, whether by the city or by the state or both, becomes the reality across the nation, now that professional sports franchises have become the status symbol for success heavily sought by our largest communities and their respective states.

New Orleans and the State of Louisiana might feel a sense of comfort now that our teams have tasted success.  We have bitten the bullet in the past and in return, we have received long-term committments from Tom Benson. Let us not forget, however, time does past and circumstances do change. The futures of the New Orleans NFL and NBA teams which today might appear safe, can always take a radical turn out.

And, now that the state has gone through its tenth straight year of extreme budget woes, some believe it's necessary to reconsider our options. Louisiana taxpayers want TOPS. We want our sports toys. We want our sexy film industry. Our industries want their handouts. We want our higher education and top-tier healthcare systems. We obviously have many wants but our revenue flows cannot keep up.

Either Louisiana must come up with greater revenue flows or we must wake up and tell those with their worthy hands out, "sorry, we can't afford you".

The day before the New Orleans Pelicans took on and walloped the Phoenix NBA basketball team, 4 games to zip in round one of the NBA Playoffs, Retired Air Force Colonel Rob Maness put whatever political future he might want on the line.  To some, he might have committed political suicide. to others, he has stood up for his fiscal principles.

In short, he said that Louisiana should eliminate the tax dollars coming from the State of Louisiana to the franchises, once owned by Mrs. Tom Benson.

Maness, who is my guest every Friday at 8 am to discuss Louisiana legislature session and other related matters, took the stand, popular--especially at this moment, or not.

No doubt, with the Louisiana legislature looking at well over 600 million dollars in cuts this year coming, scrutinizing tax credits and incentive programs is necessary, especially, if raising taxes is not an option. Of course, there are other sacred cows other than New Orleans professional sports that Maness and others feel should be on the chopping block either now or later.

So, I wonder, if Louisiana voters were given the choice between raising taxes or possibly losing the Saints and Pelicans, would they belly up to the sports table or say no, “not going to pay to play, this time”.

Below is the transcript of this segment of the interview with Maness and the video.

SABLUDOWSKY: So, which of those, say tax credit programs would you eliminate or cut severely--obviously the film industry feels like the rug has been cut from underneath them, they see their jobs go into Georgia.

MANESS: I think we need to look at every one of them and and quite frankly that's a very difficult task is to try to figure out who's getting what tax credit giveaways--try to find a list in Louisiana on a public website and I will tell you the answer to your search and that is it's not it, you're not able to find it. So one of the things that we tried to do in the last special session and I hope they take it up again is pass the Louisiana checkbook to make all of these things extremely transparent and simple to find for not only the citizens for but legislators in the state of Louisiana.  And you know what let's start with, let's start with the New Orleans Saints and the Pelicans and eliminate all of the tax dollars that go with maintaining that Superdome because look--they get, they get plenty of money and the NFL can afford to maintain its own buildings and those kind of things so let's start with that.  And that's not going to be popular, but you know what, we've got to look at every single thing and as I said the film tax credits is one of them but that's not the only one. We've got to look at all of them to make sure that we're doing the right thing in and I guarantee you when you put the light of day on some things, you'll you'll get the people of Louisiana to rise up if you do it and put that light on it and keep that light on it in a steady way that they can have access to

SABLUDOWSKY: To follow up on that, John Kay says you'll never reform the tax code in the state until you eliminate the giveaways flat simple and fair everyone wanted to open a business--another person, I'm trying to see who it was, said let's talk with the film industry--yeah you bring up a very, I mean challenging and probably unpopular issue

SABLUDOWSKY: And and that is especially right now with the Pelicans filling the facility to the brim and having national exposure, Saints getting ready to start hopefully another winning season,  do you think that something like that in terms of here in Louisiana, cutting the subsidies for Mrs. Benson?

MANESS: I don't think there should be any subsidies for any large corporation like that quite honestly we ought to eliminate all of them I think Mr. Kay said it in one of his posts "until you eliminate them all you're not going to be able to restructure the tax system to make it flat and fair and effective and the most important thing there is that you have to have effectiveness to go with the flatness and fairness of any of any tax systems, so, but I think that those are the types where we should start first is with that--because the citizens of Louisiana are not getting much bang for a buck other than a little bit of entertainment out of out of those tax subsidies and giveaways and I think it's ridiculous and most people when they, when they really come to understand how much money their hard-earned tax dollars is given away to organizations like the NFL and the NBA, they would be absolutely appalled and they probably get their pitchforks out, quite honestly, and take them up to the Capitol so, I think that we that's a good place to start but we've got to look at all of them