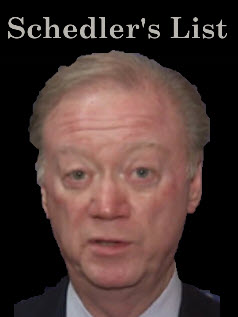 Refreshed embarrassment has come the way of Louisiana’s Republican Sec. of State Tom Schedler, and perhaps it’s more appropriate that he be ushered out the door rather than hoping he’ll do it himself anytime soon.

Last week, the Baton Rouge Advocate got ahold of cards sent from Schedler to and email messages between him and his former executive secretary, who has filed suit against him for sexual harassment. It had submitted a public records request for these, but according to it these arrived with redacted key passages that could shed light on the relationship. However, it also obtained unredacted versions, which, in the words of its editorialist, showed “a pattern of lewd and embarrassing language by one of the state’s top elected officials” that displayed “a powerful public official making sex jokes and tasteless propositions on agency time.”   The snippet placed online by The Advocate, spanning just months, doesn’t reveal that egregious of communication, but I’m confident it wouldn’t have described the nature of the entire set of conversations errantly. (For readers otherwise unfamiliar with this, I am a weekly columnist for it.) And its stories about the release of these and reporting on an interview the former employee gave proved convincing enough for a very high-profile Republican, Sen. John Kennedy, to add his voice in calling for Schedler’s immediate resignation.   A key point in Schedler’s defense has been his claims of a consensual sexual relationship, which apparently the messages don’t confirm or deny. From what The Advocate published, it seems the woman, who denies such a relationship, banters at times and on subjects unrelated to work. Consider as well she worked with him in various capacities for over a decade but left after her transfer into what she declared a deadhead job. In terms of the validity of her suit, there’s no smoking gun in the documents, and The Advocate editorializes in a way that confirms in the unpublished, unexpurgated records it has makes no such revelation. Further, these don’t appear to address whether he violated R.S. 42:1161(F), which mandates that administrators don’t knowingly place employees into jobs the work product of which is so undemanding and/or unnecessary that it wastes taxpayer dollars.

Regarding the suit, without such unambiguous evidence – writing by the alleged victim making explicit that his attentions made her uncomfortable and/or interfered with her ability to do her job, or written proof that he engaged in retaliatory personnel actions out of alleged spurning – on that count thus far we can’t declare Schedler a harasser by virtue of which thusly he should forfeit his job, if not face legal penalties. As previously mentioned, using these pieces of evidence as well as others, undoubtedly a court will determine whether her charges have merit.   But regardless of the legal implications related to potential sexual harassment, plenty in the available record points to Schedler’s unfitness to serve in office. Even from the snippet published, it’s clear that he let himself become unusually distracted by whatever relationship they had, obviously spilling over into his job performance. That he used his official email account to make such communications that had nothing to do with his job – although she obviously abetted in that use – also indicates poor judgment. That he filled these missives with, taking The Advocate’s words for it, “embarrassing language” that also was “tasteless” additionally shows poor professionalism.   Schedler said the burdens of office don’t permit him to exit at this time, although he said he wouldn’t run for reelection. And, leaving before the end of the year essentially would trigger a special election for the office.   But the Louisiana Legislature can make him go. Art. X Sec. 24 of the Constitution provides for impeachment of, among others, elected officials for “commission … of … gross misconduct while in such office.” Nothing in statute defines “gross misconduct,” but even with the more serious charges left as yet unproven, the smaller things combined may add up to this, especially when the job assumes the highest integrity expected from the state’s chief election officer.   Even the threat of impeachment, where the House of Representatives indicts and the Senate tries with a two-thirds vote convicting, probably would provide sufficient encouragement for Schedler to leave on his own to spare himself further humiliation. If begun now, he likely would exit quickly enough for arrangement of a special election during this fall’s federal and other state elections at no additional expense. Legislators just have to have the will to do it.
Read 1300 times Last modified on Monday, 30 April 2018 22:33
Tweet
Tweet
Published in Louisiana legislature
Tagged under