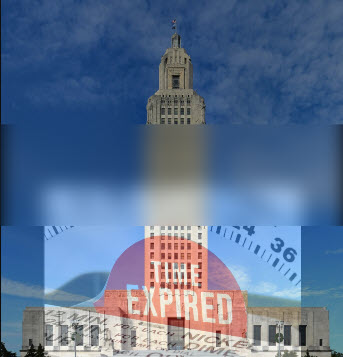 Yesterday, we posted part one of an interview of lobbyist Mary Patricia Wray. In that segment, she talked about the difficulties legislators are having this session. They are overworked and underpaid. They are stressed and combative. In fact, things are so bad that according to other sources, the legislators might not pass a budget until after the fiscal year begins. For Louisiana, that would be an extraordinary non-accomplishment, never been done. But, this is the Louisiana legislature, one year from elections.

In part two, below, Ms. Wray continued the discussion of the legislative difficulties. She also focused upon other issues such as term limits and reapportionment.

WRAY: Mm-hmm which for a lobbyist I'll just tell you that's a nightmare on complicated issues you know like the the minimum foundation program which is a very complicated funding mechanism for public schools.  Public pensions which is a very not a black-and-white issue always. Health care obviously a very complex policy issue and most new legislators think that the only reason we haven't fixed everything before is because they weren't here before and so takes them a couple months in some cases and in some game just a couple of years to figure out that everyone else had good intentions - just really hard problems.

But yeah we're not doing much and when I say we're not doing much - I don't mean that our legislators are not working hard they're working very hard we're just having a hard time coming to an agreement on I'll admit it on things that don't seem very important in light of what's going on with the budget. I think for some people you know refereeing a battle between florists and people who would like to be florists just doesn't feel like a very important matter right now when we have so many other, major major issues happening.

WRAY: I think we have a strange confluence of events in Louisiana, that's again just a little bit different I said earlier. I think before we were really recording that consultants from all over the country you know I'm working on a race in Ohio right now they'll tell you that Louisiana is different when it comes to politics and I, being a transplant, I've been here for 10 years maybe after 20 people accept me you know accept let me into the fold-- but it really is different personal stories really matter here and that gives me a lot of hope for our state's ability to withstand that very divisive you know political stuff--I think one thing we have going on for us it's really different from everywhere else is we have there's always big divides in politics.  I think technology has made it easier to divide people and to speak to their more based instincts to make them single-issue voters to make them single issue people, single issue humans, but we also have the entrance of the real influence of term limits happening at the same time as all of this other stuff that's influencing politics from the outside and so we we had, we had the ability before even when the political makeup of let's say a state Senate District might be changing on the federal level, we had very strange politics in Louisiana where if a blue Senate District started to move red on the federal level it might stay blue and stick with their state senator who was a registered Democrat for another twenty years--even as they trended red and so because of term limits, we just have I think more clamoring to get far to the left and more clamoring to get far to the right, I think we see which strategy is winning in most of Louisiana and the reason for me why all this matters as a voter, you know separating myself from what I do for a living is that in 2020, we will do redistricting in Louisiana so our 2019 elections are-- I just had my first baby he's nine months old and what we do in 2019 will impact what his state legislature is doing when he registers to vote for the first time at 18 because many of the people who get elected in 2019 will still be around if let's say they're a run for State House they will serve their three terms and then by the time he registers to vote they'll be state senators so we can very well in 2018 we could be selecting the senate president you know when my my son is 18 years old and so i think about the generational power tics of these kinds of elections--and I think about how much redistricting matters and how much fair redistricting is important to making sure the state remains representative of the people that actually live here and actually live in each especially in our congressional districts.

It's easy for me to say I'm a chronic voter you know. I show up for every special, every, I never miss it. I wish I could convince more people to understand how much it really does matter to put their voice in the bucket and make sure that the people who represent them get a full picture of what their district really wants.  But 2019 there's gonna be 50 new legislators which gives me a headache.  I feel nauseous almost just thinking about trying to educate 50 new people on complex issues that really impact everybody's daily life.  You can probably tell I'm not a big fan of term limits.