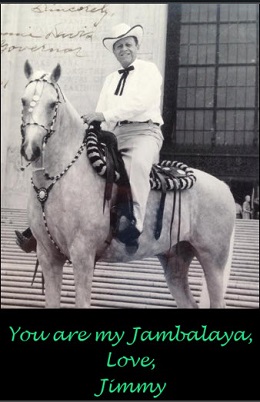 Governor Jimmie Davis must be rolling over in his grave right now.  Louisiana’s internationally acclaimed official state song is under attack by the Louisiana Legislature. There is an effort by some south Louisiana legislators to designate the Cajun classic Jambalaya as an official public ballad. And them’s fightin’ words for those who have embraced You are my Sunshine as the sanctioned formal melody.

The Sunshine defenders point out that It could be the most recognized American ballad worldwide. Go to a small Asian community where little or no English is spoken.  Start humming, “You Are My Sunshine.”  More likely than not, the locals will join in singing the song in English.  Everybody knows the words to a down-home tune written by a Louisiana country singer and movie star. And he was sworn in as Louisiana Governor seventy-five years ago this month.

A few years back, I was in Cambodia at the Golden Triangle, where Burma and Thailand converge.  I was having breakfast in a rural village at an outdoor café, and the young waitress who knew a few words in English said, “You American. I love America. I sing about America.”  Then, with a big grin on her face, she broke out in song and danced around the dirt floor singing “You Are My Sunshine.”

That’s in no way meant to belittle the Cajun tune played in dancehalls and musical venues all over Louisiana and much of the south.  But there is a vast difference between the two songs. Sunshine was written and sung by a Louisiana native who happened to end up as governor.  Jambalaya was written by Hank Williams, who was born, raised and is buried in Alabama.  Haven’t we here in the Bayou State been humiliated enough by Alabama football to have to have our state song written by another Roll Tide advocate?

Actually, Jambalaya’s melody is basically the same tune taken from the song Grand Texas, about a lost love; a woman who left the country singer to go with someone else to "Big Texas," where ever that’s supposed to be.  So we have an Alabama song written off a Texas tune that may end up as the Bayou Nation's new state song.

And what about some of the Jambalaya lyrics?  A line in the song is “For tonight, I'm-a gonna see my ma cher a mi-o.”  OK. I get ma cher. Even us uneducated rednecks know that ma cher means “my dear.”  But what about this a mi-o.  The word doesn’t exist.  I’ve checked slang dictionaries in French and Spanish.  No such word.

Now I’ll admit it’s a bit hard to defend some of the lyrics in Sunshine.  Take the stanzas:

You told me once, dear, you really loved me
And no one else could come between
But now you’ve left me and love another
You have shattered all my dreams

I’ll concede such verbiage doesn’t set the best example for our young folks to aspire to greater heights.  But hey, it’s only a song. Just like the partying words of Jambalaya, I guess it really doesn’t make much of a difference. Outside of a bar or dancehall, when was the last time you heard either song being sung?  So maybe it’s just as well to have two state songs.

Being a redneck and having gotten to know Gov. Jimmie Davis back in the 1970’s, I’m just partial to You are my Sunshine.  And just who was Sunshine?  A past lover? A devoted family member? No.  Sunshine was Jimmie Davis’s horse.  The palomino mare is buried up on the Davis family farm above my old home of Ferriday.  I pass that way occasionally and remember back on my conversations with the Governor.  And yes.  I do hum a few bars of what will always be my favorite Louisiana song, You Are My Sunshine.

More in this category: « Pre-K education, not OK, in Louisiana, investments needed Insurance costs are a hurricane, natural disaster for Louisiana & US »
back to top