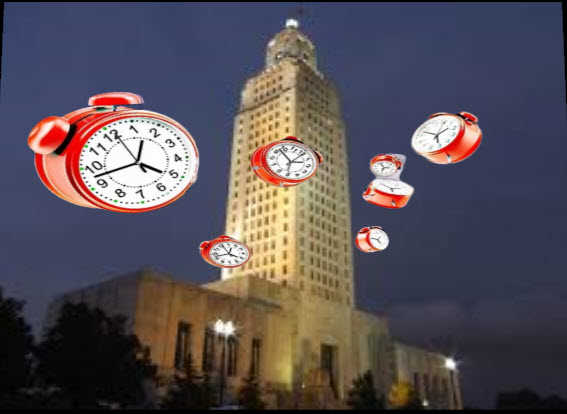 It may have been a good idea when it was implemented in 1918; however, over one century later, it is time to end the craziness of changing the time every few months.

On Sunday morning, Americans will need to adjust to the reality of losing an hour of sleep because we will “spring forward” one hour and move back to Daylight Saving Time.

In November, it will be time to “fall back” an hour to Standard Time. All this clock changing leads to increased accidents, a higher incidence of heart attacks, a loss of productivity and a needless confusion for the American people.

Some states, like Louisiana, may be ready to act. In this legislative session, Louisiana State Representative Dodie Horton (R-Haughton) has introduced a bill to adopt Daylight Saving Time throughout the year. If it passes in the legislature, Louisiana will join nine other states that have enacted similar legislation.

Unfortunately, the Louisiana law cannot be implemented until it is triggered by federal legislation. Who knows when Congress will act?

Hopefully, our federal lawmakers will listen to a growing number of people across the country who want to end the madness. In 2019 survey, conducted by the Associated Press and NORC Center for Public Affairs Research, only 28% of respondents approved of the current arrangement of changing time twice a year.

This opinion is shared by Donald Trump Jr., who tweeted “Yes. Daylight savings time all the time!” U.S. Senator Marco Rubio complained that “I prefer Daylight Savings over Standard but in the end what I really want is to end this stupid twice a year time shift.”

Senator Rubio is right, the time shift is “stupid” and needs to end. In Louisiana, Representative Horton said she filed her legislation because of the demands from her constituents.   According to Horton, with Daylight Saving Time throughout the year, “productivity is a lot higher, and possibly less crime, fewer car accidents, more family time.”

There are economic benefits as well to making Daylight Saving Time permanent. In the view of Baron Christopher Hanson, of RedBaron Consulting. “Extended daylight hours allow outdoor restaurants, golf courses, parks, and patio or rooftop bars to see sunsets well past happy hour and into dinner time, as opposed to forcing everyone into dismal darkness just before standard 5 p.m. business hours come to a close.”

With more sunlight, there are more recreational opportunities which is not only healthy for individuals wanting to exercise, but it also healthy for many businesses that offer leisure activities.

In this session, Horton’s bill is not the only one that has been filed on this issue. State Representative Sherman Mack (R-Albany) filed a bill with similar language.

Hopefully, the legislature will act, which will be one step closer to ending the clock chaos. Horton says she feels “pretty confident” in the merits of her bill. This is in stark contrast to many of the 1,700 bills that have been introduced to take away freedoms, enact more fines and extract more money from Louisiana taxpayers. Let’s hope common sense prevails in Baton Rouge this year with Daylight Saving Time and all the other issues under consideration.

More in this category: « Louisiana Republicans give Edwards another gift with Speaker Schexnayder Louisiana is sicker, poorer with Coronavirus, oil price jolt »
back to top