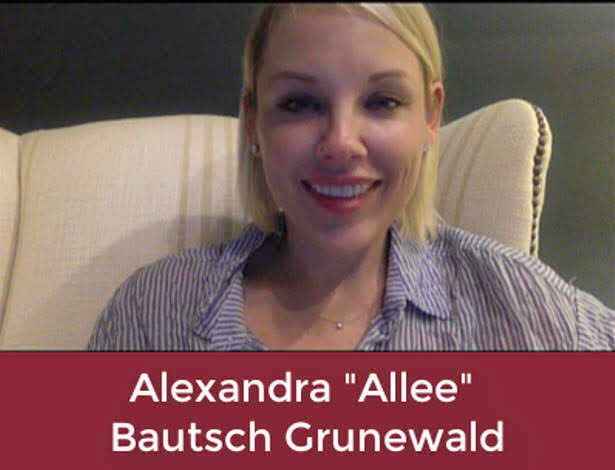 Allee Bautsch first got into politics when helping Louisiana Governor Bobby Jindal during his Congressional campaign, then getting a formal position as a staff member, then campaign finance director and later, fundraiser.

While she has the academic creds, it seems that, at least, for her, the real education took place while attending the “Political School of Hard Knocks”, doing a great job, knowing how to deal with people and and taking potential contributor, from a “no” to a “yes”.

As her “The Bautsch Group”web site, states, “Alexandra "Allee" is a native New Orleanian. She attended American University and graduated with a Bachelor's in Political Science and International Relations. After managing a congressional office in DC, Alexandra was named Finance Director for Bobby Jindal's Gubernatorial Campaign. She launched Louisiana-based Bautsch Group in 2007. The Firm Specializes in implementing fundraising strategies to State and National campaigns. With years of experience, Alexandra has earned a reputation as the top fundraiser in Louisiana and one of most sought after Republican fundraisers in the country. “

Obviously, one key to success is to work for a winning candidate. But, a lot of people do just that however, they don’t achieve the reputation and the success that Bautsch enjoys.

Below is the initial part of my interview with Ms. Bautsch in which she details her professional experience and specifies the qualities she believes are the key to a successful career in the area of campaign financing:

SABLUDOWSKY:  How  did you get started and the reason I'm asking this is because I'm sure that there are a lot of people out there who are fascinated with the ascent in terms, I mean you're young and yet you have such a wonderful reputation in this area, so how did you get started?

BAUTSCH:  Sure yeah it wasn't something I sought out, actually, I had intention to go into law school after undergraduate school and always wanted to work in politics and so I got tied up working for Bobby Jindal then Congressman Bobby Jindal's congressional office and so I was office manager in Washington and when he decided to run for re-election for a run for election a second time for governor, obviously, the first time was unsuccessful he won the second, second round--they named me his finance director.  And it was more out of a necessity than anything, they needed somebody to do the job and it just so happened that I was able to grasp the skills needed and  it's kind of water under the bridge from there.  So  that was God that was 2007.

SABLUDOWSKY:  Right right, 2007.  So you were the office manager of the DC office or local office

SABLUDOWSKY:  Okay that's where everything was happening then

BAUTSCH:  yes if he was in Congress, I was actually there during Hurricane Katrina and there we kind of held down the fort in Washington and --it was very unfortunate-- I couldn't get home soon enough. I was very happy when I had the opportunity to move home

BAUTSCH:  Well, it was it was a great campaign, we were won with a commanding lead and then  you immediately start preparing for re-election so you think you'll get a little breather, the day,  inauguration everything happens and then you immediately kick into gear and go into reelect mold.  And then we do work with clients outside of just the governor at the time, so  we worked on a couple different projects for him and things pertaining to his agenda so  there were some policy organizations formed for instance when he wanted to pass the ethics package, when he first got into office that was a major part of this platform that he ran on and said we did have a fundraising apparatus to raise money to promote a lot of his legislative agenda.

SABLUDOWSKY:  So that's part of the fundraising process not just to get somebody elected but actually take certain issues whether the person is an elected official or somebody who just has a interest in an issue and raise money for that, am I correct?

BAUTSCH:  Yeah there are a couple different things you can do-- the evolution of Super pacs it's really kind of changed giving, and the structures, and the role of state parties and politics and parties still do but more so in the past you used to serve as kind of a vehicle for  some of the larger dollars when you wanted to support a candidate in a more significant way and so super pacs have kind of evolved to be that specifically for an individual candidates and then you've got just the traditional pacs which candidates obviously start themselves to promote other candidates.  So in other words you would start a PAC if you were wanting to give money to seek a leadership position and that's a traditional PAC and candidates can direct those funds. In a super PAC no coordination is allowed so in other words you have to firewall yourself off from that organization and you as a candidate can't direct those funds and the contributions are reported.

BAUTSCH:  Now there are C 4 organizations and those are formed to promote policy  and those can't be directly coordinating with the candidate or condone a specific candidates agenda, so in other words it has to be for social welfare or  the embetterment, or perceived embetterment of society, right? So you would start with C-4, if you, for instance, there's a ballot initiative in Baton Rouge right now for a mental health facility and so a C-4 organization would be an appropriate vehicle for those funds.

SABLUDOWSKY:  So yeah we'll talk about the difference between those different vehicles, and thank you so much I really appreciate it--so in terms of  so you have a political science background and you want to go to law school and you got involved in politics and campaigning and then political office administering the office, what type of skill set do you think that somebody should have going into to do what you're doing, if that's possible. Is it just being there getting your hands dirty and getting the job done? Is that is that it or what ?

SABLUDOWSKY:  And there will be a lot of "no's"

Want to watch more of the roughly one-hour interview with Allee Bautsch?

Here is the link to the subscription-based webinar-interview that took place on Wednesday September 26. Here are just some of the issues we discussed:

Whether candidates should ask for campaign funds themselves or if the “ask” should be done through the fundraiser?

What was it like to raise money for Governor Bobby Jindal, in his campaign for governor versus raising money for him as a national figure and potential candidate and then candidate for US President?

What are the qualities that the quintessential candidate might have to help him or her to raise campaign money?

Does she currently support a particular candidate for governor, assuming that person runs for the 2019 race?

Is she generally a part of a political campaign team?

Has she been on a different campaign team with a former ally and if so, how does the relationship generally develop?

Do conflicts occur in which two or more former clients might be now facing one another for a political office?

Can the same fundraising organization consult for the candidate and a Super PAC? If so, how is that done?

What are the payment arrangement, by percentage of revenues raised or by payment by term?

What are some of the issues working for a candidate vs. a Super PAC?

What are some of the difficulties and prohibitions related to campaigns and Super PAC’s?

With the nation so angry and divided, what might be some of the issues for a campaign fundraising consultant?

Is fundraising seasonal as other political campaign consulting might be or is it year-around?

What is her position about fundraising for a client based upon controversies of the moment?

What role does technology and micro-targeting have upon political campaigns?

Does she consult for organizations other than election-political candidacies and if so, what might be some of the differences?

What might be some of the relationships between polling and fundraising?