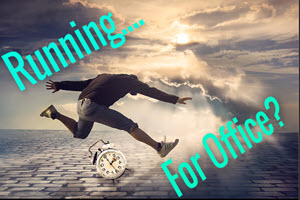 Deciding to run for office Running for elective office is not for those operate life impulsively.

It is a process.

It’s slightly different to running for re-election or for that matter, deciding to use existing good name recognition to propel into another political contest.

Recently, I had the opportunity to discuss a number of election-related issues with three of the best minds in the area, UNO Professor Dr. Ed Chervenak, former Appellate Judge David Williams and well-known political consultant, James P. Farwell.  One of the very first questions discussed was, how would you direct somebody who might be considering running for elective office.

Below are excerpts from our longer discussion that lasted over 50 minutes.

Also below is the video of this part of the webinar.

You can watch any one of the other webinars which we will list below at a very reasonable cost.

I'll take that, the first thing you need to do is ask yourself how you're gonna win the election and that involves--where are you gonna put together what we call a majority winning voter coalition?  Where are you gonna get the votes that you need for us to make the run off or to win a runoff. So that's number one. If you don't know where you're gonna go and who you're going to appeal to, and what's your target audiences are, it doesn't make any difference.  Second thing is--how much money do you think that you're going to need to articulate your message--where are you going to do it? Candidates, and for the most part are utterly clueless as to where they're going to be able to get money and it doesn't make any difference when they're running for the Senate or for the House of Representatives on a state or a federal level or anything like that. The process is the same.. One difference though is that in US Senate races and in to a certain extent governor's races that have a high profile, they risk losing control over their own campaigns because so much outside money will come in to be spent. That may change. There is a lawsuit that has put the brakes on the spending of these outside groups that you're seeing taking place right this minute, in federal elections and so we don't know where that's going to turn out in terms of the US judiciary, but the whole fundraising thing is extremely important.

Well obviously it depends on the level of resources that they have and usually what I would suggest to a candidate is they first do a focus group as opposed to a poll and then get a sense of what people are thinking about. Do a focus group of people from the district that you want to run in and then get a sense of whether people would support your candidacy or not and then you can decide to do a larger poll, do a benchmark poll, what's the level of name recognition out there?  What kind support do you think you have out there, are they willing to vote for you? Do some head-to-head questions with the new candidate with maybe the incumbent and just see what happens, but my bias is to do the live interviewer poll . It is expensive but I think I still think it's the gold standard

You need to look at your district and before you shell out a lot of money, do you fit the kind of profile of somebody that that area would want? Whether it's statewide, congressional seat or your district. And then if you believe that you can relate to them with that profile, then I think you do find out you got the good together--what are the issues that are important to people there and then can you raise money?  The campaign finance laws is so complicated and they have so many limitations along. In the old days, I remember in 68, I don't want to go back too far, but I remember when Eugene mccarthy ran for president. Marty Perez just wrote him a check for a million dollars.  He said you can run-- he wouldn't have been able to go. But everyone knew where the money came from. You know I think you ought to know exactly where all funds come from, there are being real transparency. But right now we place all these handicaps that everyone's out there constantly fundraising because you can go only get in small increments. So you have to go and you keep doing that instead of doing your job or running for office. Then if you fit that profile you think you can raise the money, you really oughta allow allies--is there someone else in there that's a prohibitive favorite--do you have a realistic chance for winning. Just because you're

Right on the issues and things like that, is there some other factor that you need to look at?  So you know I think that--I love politics, I think it's exciting and I think that a lot of people in politics just get unfairly criticized whether they're Democrats and Republicans. It's tough being out there. I would also tell someone that you're running for office--get ready for the ups and no one really knows what it's like until you're the candidate. At 8 a.m. You can be exhilarating! My god this day is great an hour later you get a report, you're totally depressed. I mean it's it's a roller coaster and you have to be ready for people to say things about you, just keep going.  Are they ready for this?  They may think they are. So but you need good people, you can get people like Jim and Ed come in and advise you how to run the mechanics of the campaign. But you have to figure out are you psychologically ready to do it?

Part 1 of the interview with Farwell, Chervenak and Williams. Comparing elections

Watch one or more of our past webinars with Bernie Pinsonat, Jim Brown, Greg Buisson and Allee Bautsch Grunewald.  please click here.

Subscribe to the complete bundle of past webinars at an outrageously low cost, click here. If you purchase the bundle, you will also receive a twenty percent discount on the next webinar

More in this category: « Comparing past and present political and elections campaigns--Farwell, Williams, Chervenak
back to top