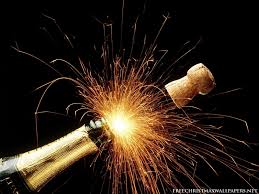 I spent my New Year's Eve at my old apartment at the Pontalba Building, which had a commanding view of the dropping of the Baby Bacchus. The apartment is now being rented by my darling friend, attorney/artist Stephen Rue. It was very deja vu. The big difference was that I was a guest rather than the hostess like I was for seven years. It was a lot of fun and saw many old friends.

In case you did not see the wonderful article that was written about me and my love for champagne in the InSide Out section of this past Saturday’s Times Picayune - check it out:

Last night I attended a fabulous seminar with my darling friend mixologist/ author Tony Abou-Ganim at  the American Museum of The Cocktail. He showed how to stock and tend a home bar. The cocktails were delicious. The next seminar will be on Monday, January 24, when  we will join master mixologist Dale DeGroff, (master raconteur and storyteller as well!) as he shares historical notes, drinks, and memorable stories generated from neighborhood bars, notorious saloons, and legendary drink palaces of lore. Not be missed! For more information call 504-494-2220
The same night my darling friend  photographer Pat Jolly was hosting her annual Silly Hat Birthday party at the Blue Nile. As always, it was fun seeing all the silly hat that people wear at such event.

Last week I went to the art exhibit of attorney Steve Rue at the JW Marriott.. The entertainment was provided by talented cabaret singer Suzaune Yee McKamey and Co.

The rest of the week is going to be exciting since, on  January 6, is the beginning of the Carnival Season and we will have not just one, but two wonderful parades: Phunny Phorty Phellows -"The Heralds of Carnival" and the Third Annual Joan of Arc Parade. And, on January 8, is the 100 year anniversary of the New Orleans Museum of Art. That weekend is also the HOUSE OF BROEL - 40TH ANNIVERSARY BRIDAL SHOW (see calendar for details).

I would also like to extend a warm New Orleans welcome to the Jazz Education Network which is hosting its Second Annual Conference at the Roosevelt Hotel from Wednesday through Saturday, paying tribute to Jazz in the city where it began. For those who want to attend it should be very interesting, with educational seminars and live entertainment in the evening. See the calendar below for more details.

Live jazz and jazz education are coming home to the city where the genre began from January 5-8 as the Jazz Education Network holds its Second Annual Conference at the Roosevelt Hotel. Educational seminars will be held during the day and live performances will liven up the night as top name musicians gather to perform and educate. The theme of the JEN Conference, “Honoring Performance in the Birthplace of Jazz,” pays tribute to New Orleans and its contribution to the birth of jazz. Enthusiasts, vocalists, instrumentalists, arrangers, composers, administrators, managers, agents, journalists, historians, archivists, improvisers, educators, and students of the music from all age groups are invited to attend and network with music product professionals. The conference opens with a live jazz performance Wednesday night, January 5, at 9:00; then educational sessions will be held during the day, starting at 9 a.m. The main concert series begins at 7:30 each evening from Thursday through Saturday. During the conference, 27 student jazz ensembles will be performing in concert on the dedicated JENerations Showcase Stage in the Roosevelt’s Orpheum Ballroom, while a select few will be presented on the Main Stage. In addition to the impressive array of student talent, there will also be more than 30 professional ensembles and about 65 clinics and panels. Cost for the conference is $175/Member, $45 Spouse/Partner and $35 student member with valid ID required. The “Meet Me in New Orleans” Fundraiser Celebration is $45. For registration information go to http://www.JazzEdNet.org/.

Thursday, January 6
Phunny Phorty Phellows-" The Heralds of Carnival"
Humor and whimsy are still very much a part of the Phunny Phorty tradition with some members favoring costumes inspired by current events and the peculiarities of local culture. Masked revelers gather at the streetcar barn in Uptown New Orleans for the Twelfth Night ride and get into the spirit of the event by carrying signs and banners with humorous slogans and messages. There are champagne toasts and second line dancing as the sounds of the famous Storyville Stompers New Orleans Brass Band fill the air; the Phellows, after cutting a ribbon and announcing, "It’s Carnival Time!" then board a decked-out party streetcar. Uptown 7:00 p.m

Begins at Bienville statue ends at Joan of Arc statue on Decatur Street, French Quarter, New Orleans.6:00p to 10:30p
at Bienville House.599 candles and matchbooks will be handed out to parade goers to join in the procession
· Handmade throws include: 16 decorated wooden swords given out by the Maid of Honor (student Joan of Arc Mallory Young, from St. Martin’s Episcopal
School); surprises from saintsforsinners.com (makers of the gorgeous hand-decorated boxes containing handpainted Joan of Arc medallions given to
lucky folks last year); Saints magnets handmade by Sister Rita of The Poor Clare Monastery; handmade wooden crosses, locally designed prayer cards, wooden doubloons, and other unique limited handcrafted items. · Special guests this year include: Councilmember Kristin Gisleson Palmer riding as “Joanie on the Pony” in a golden costume; the new director of Alliance Francaise New Orleans, Lilian Cadet, walking as our krewe King. · Wolgemut will lead the parade with pipes and drums playing their “medieval music for modern minds”.

The Krewe of Orpheus invites everyone to join us for New Orleans' newest tradition. Dance, drink, eat and welcome Carnival at the inaugural 13th Night Party. Featuring live music by Vince Vance & The Valiants, food by local restaurants, open bar and a exclusive auction of a work by Louisiana's Artist Laureate, George Rodrigue, to benefit the George Rodrigue Foundation for the Arts.8:00pm at Generations Hall.

JANUARY EVENTS AT THE FRENCH MARKET

Holy Ahoy! Ring in 2011 with your favorite all-singing, all-dancing group of Nuns! Jefferson Performing Arts Society (JPAS) is pleased to present their production of Dan Goggin's MESHUGGAH-NUNS! The Ecumenical Nunsense on stage January 7-23, 2011 at Teatro Wego! Theatre, 177 Sala Avenue in Westwego. Performances are Fridays and Saturdays at 7:30 p.m. and Sundays at 2 p.m.. The production will also be on stage Saturday, January 29 at 7:30 p.m. at Benet Hall, Saint Joseph Abbey in Covington, LA.

January 8
NATIVE NOW: "Pruning Techniques"
9 a.m. and 10 a.m.
Join Longue Vue’s native plant specialists in the Wild Garden at 9 a.m. and 10 a.m. to learn about the beauty and adaptability of Louisiana plants, as well as to discuss local habitat, biodiversity, and the ecological impact of gardening with native species. Contact Hilairie Schackai at 504.293.4726 or hschackai@longuevue.com for information. Longue Vue House and Gardens,7 Bamboo Road, ? 504.488.5488 ? www.longuevue.com

Obers will gather as every Friday from 6 to 7 p.m. at this West Bank Bar and Restaurant: Royal Palm Restaurant.  Phone:504-644-4101.Website: www.RoyalPalmRestaurant.com

FREE BIRTHDAY PARTY!
Be our guest to a FREE public birthday on Saturday, January 8.
The morning kicks off with the St. Aug Marching 100 parading down Lelong Drive. There will be performances throughout the day from the New Orleans Ballet Theatre, the Symphony Chorus of New Orleans, and the New Orleans Opera Association. Cafe du Monde is providing coffee. And OF COURSE there will be lots of birthday cake! New Orleans Museum of Art,One Collins Diboll Circle, City Park,504-658-4100

January 11
Round Table Luncheon
The monthly popular Round Table Luncheon hosted by yours truly at noon at Begue's Restaurant of the Royal Sonesta Hotel will salute New Orleans and its future and will feature City officials and political and business analystics that will speak about the future of New Orleans in 2011. Live entertainment by Becky Allen and heidi junius accompanied on the piano by Jim Walpole. The three-course gourmet luncheon is only $38 and includes complimentary parking and wines to complement the food. For reservations call Noel Scallan at 504-553-2220.


Tuesday, January 11
Toasting with Margarita at Le Booze
Please join me for a networking evening with special guest Bonnie Broel at Le Booze from 5:30 to 7 p.m. "Happy Hour" prices and complimentary cheeses.

As part of its mission to present and promote the art and artists o ef New Orleans, U.S. Biennial presents Prospect.1.5 New Orleans, a fifteen-week program of exhibitions, symposiums, and public events. Prospect.1.5 highlights the contemporary art scene in the city, with over fifty artists presenting work in thirteen venues throughout the New Orleans metropolitan area.
http://www.prospectneworleans.org/

ARMAND ST. MARTIN
New Orleans' own "Pianoman and Entertainer" Armand St. Martin performs every Friday and Saturday Night from 7-10 p.m. at The Pontchartrain Hotel to the tune of no cover charge. Patrons can enjoy a fabulous smoke-free environment while listening to Armand St. Martin's quintessential stories and music that is truly "Naturally N'Awlins." The Bayou Bar at The Pontchartrain, 2031 St. Charles Ave.