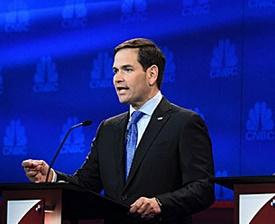 After the latest debate debacle, Republican presidential candidates have finally had enough. They are meeting this weekend without officials of the Republican National Committee (RNC) to discuss the format of upcoming presidential debates.

The final straw was Wednesday night's CNBC Republican debate. While it was a ratings success, drawing a CNBC record 14 million viewers, it was a political disaster. The three liberal moderators exposed their bias and utter disdain for the candidates. The questions were unfair, trivial and not germane to the supposed topic of the evening, the economy.

The tone of the debate changed when Senator Ted Cruz responded to a question about the budget by blasting the moderators. He said that the loaded questions were an example of why the American people “don't trust the media.” After his statements, the floodgates were unleashed and the rest of the candidates took turns criticizing the questions. It was a remarkable example of turning the tables on the moderators. As a result of the debate, a new rallying cry has been established for all of the candidates. It is a clear reminder that as Republican presidential candidates they may differ with each other on issues, but they are united together against two political enemies: the Democrats and the media.

After the backlash, the fools at the RNC finally received the message. RNC Chairman Reince Priebus decided to remove NBC as the broadcast partner for the February 26, 2016 presidential debate in Houston. In a letter to NBC Chairman Andrew Lack, Priebus said that the decision was made because CNBC, an NBC broadcast network, conducted the last debate in “bad faith.” Priebus noted that many of the questions were “inaccurate or downright offensive” and were designed to “embarrass our candidates.”

Of course Priebus is right, but the only reason he took this step was because of the candidate revolt. He knew going into the debate that CNBC was a liberal network. The real question is why would the RNC partner with such a network in the first place?

The CNBC debate followed two other debates that were justifiably criticized. In the first debate, moderator Megyn Kelly of Fox News repeatedly targeted Donald Trump with unfair questions. In the second debate, CNN moderators pitted candidates against each other on various issues, trying to create a political “cage match.”

The real fault for all of these debacles lies with the leadership of the RNC, which sanctioned the presidential debates. The presidential candidates understand the problem which is why they are excluding the RNC from their meeting this weekend.

Now that he realizes the extend of the backlash, Priebus is doing damage control. In an interview on Fox News, Priebus said that “Every debate on the calendar is going to be reevaluated, reset – look at the format, the moderators, everything.” This corrective action is too little and too late for the RNC to save any of its credibility. For years, the party has agreed to liberal “journalists” moderating debates with GOP candidates.

Back in 2012, ABC News anchor George Stephanopoulos, former Clinton White House official, questioned Mitt Romney about whether he supported a “ban” on contraceptives. This unusual question was part of the Democratic Party's overall strategy in 2012 to paint the GOP as being part of the so-called “war on women.” This strategy helped Obama win a strong majority of female voters and defeat Romney in the general election.

The RNC also participates in the Commission on Presidential Debates and this group sanctioned the 2012 televised forums. In every one of those debates, a liberal served as moderator and the result was devastating for the GOP presidential nominee, Mitt Romney. It was especially obvious in the second debate, when Candy Crowley of CNN served as cheerleader and public relations spokeswoman for President Obama. So, Romney was battling not just Obama, but the moderator as well.

It is time for action. Not only should NBC be dropped as a broadcast partner, but RNC Chairman Reince Priebus should be fired. Talk show host Mark Levin was the first to call for the Chairman's firing. According to Levin, “that guy's incompetent, he's a boob.” Well said!