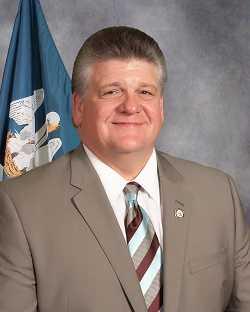 Here is a press release from the delegation's chairman, Lance Harris

“Now, more than ever, our state needs a Governor with a proven track record as a conservative reformer,” said House Delegation Chairman and State Representative Lance Harris (R-HD25). “David Vitter has the vision, knowledge, and experience to lead our state. Time and time again, David has stood for conservative values and fought against government waste and corruption. While in the U.S. Senate, David has proven that he puts Louisiana first. We, as a Delegation, stand behind David and support him wholeheartedly in the upcoming election.”

“On almost every single issue, David and John Bel differ drastically.” Harris said. “When it comes to education, David supports parental choice and letter grades for schools. John Bel does not. When it comes to our budget, David supports restructuring our budget, reforming welfare, and smart cuts. John Bel does not. Ultimately, the Republican Party stands for conservative values and religious liberty; the Democratic Party platform does not. Our Delegation believes that the choice for Governor could not be clearer.”

Upon learning of the Delegation’s endorsement, Vitter said, “I am honored to have the support of the House Republican Delegation. These legislators understand the enormous challenges we face as a state, and they understand that real leadership is desperately needed. I look forward to working with each of them and the entire Legislature to tackle these challenges head on, with real leadership, so we build a brighter future together.”

The election for Governor will be held on Saturday, November 21, with Early Voting being held November 7 - 14.

More in this category: « Kennedy's MRI poll has Edwards by double digits over Vitter for Louisiana governor Kennedy Poll: Edwards by 11, cites Vitter's attacks »
back to top